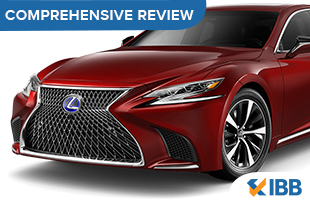 Lexus is a comparatively new Luxury marquee in India. So a little bit of history about the Lexus brand will not be out of context here. In 1983, Elji Toyoda then chairman of Toyota Motor Corporation decided to produce a luxury automobile. He wanted his new vehicle to be the finest luxury car in the world-offering elegance, comfort, speed, dignity, and beauty along with an unprecedented level of customer service never seen before in the car industry.

The first Lexus, the LS 400 was introduced to the auto world in the year 1989, setting a new standard for luxury in the global car market. Lexus is the pioneer in introducing new technologies in the auto world and they are the first car manufacturer to launch the world’s first luxury hybrid, the RX 400h, and has since expanded their line of hybrid cars to GS, CT, ES and LS models.

Lexus forayed into the Indian market in the last calendar year. Currently, they have five models in India: the LX (full-size luxury SUV), RX (mid-size luxury crossover), NX (compact luxury SUV), ES (mid-size sedan) and the LS (full-size sedan). The LS 500h is the top of the line car in the Japanese luxury brand. This bold, large and luxury limousine has an air of intrigue and we try to unravel the new Lexus LS 500h for you. 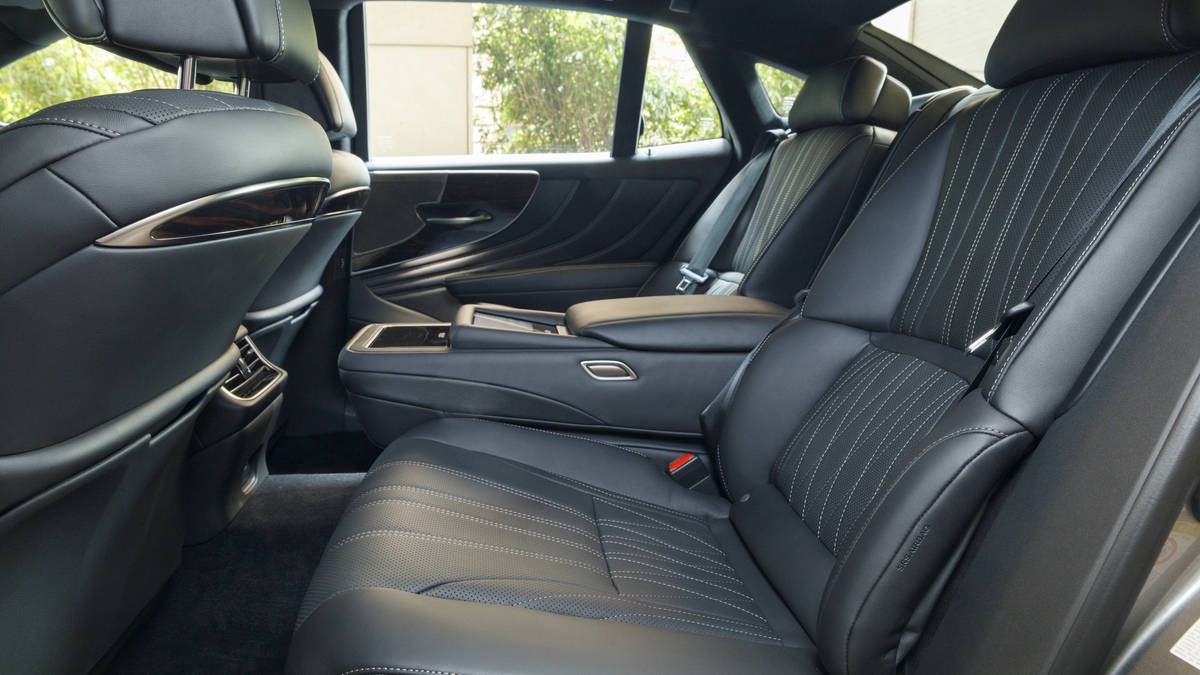 Lexus 500h is a perfect example of how a lot of loud elements put together to create magic in design. It’s a refreshing change from the ‘understated elegance’ syndrome of the car German manufacturers.

The extra bold and large spindle-shaped grille dominates the front. Built with 5000 individual surfaces (yes you read it right, FIVE THOUSAND!), the grille in itself is a 3D modern art. Flanking the grille are two sets of ‘Z’ shaped LED headlamps and a pair of large air scoops. Intricately designed front bumpers complement the overall aggressive and ‘unusual’ face. And definitely, it is ‘like it or hate it’ affair at the front.

The side profile compared to the front is lot unfussy; however carries the bling here as well with the massive 20-inch chrome wheels. The car has a proper three-box saloon silhouette and has a smooth flowing design for the side profile. The car has a perfect blend of luxury and sportiness from the side angle.

Compared to the front, the rear has comparatively conventional lines; but has loads of chrome to maintain the air of excitement. The LED wraparound tail lamps also have a fresh design with some chrome inserts as well. In short, Lexus is crystal clear in what they want; to stand apart and the design guarantees it!

Step inside and the excitement levels are maintained here as well. The interior of this Lexus is designed and executed in such a way befitting to a car belonging to the luxury end of the automotive spectrum. The car packs in a high-quality interior that drips quality and workmanship. Extravagance will be an understatement while describing this cabin. Attention to detail is something to be seen to be believed, intricacies like the hand-pleated door trim (resembles origami) and Kiriko glass adornment represents the epitome of Takumi craftsmanship. The Lexus designers spent more than a year to finalize LS’s Agathis art wood designs. 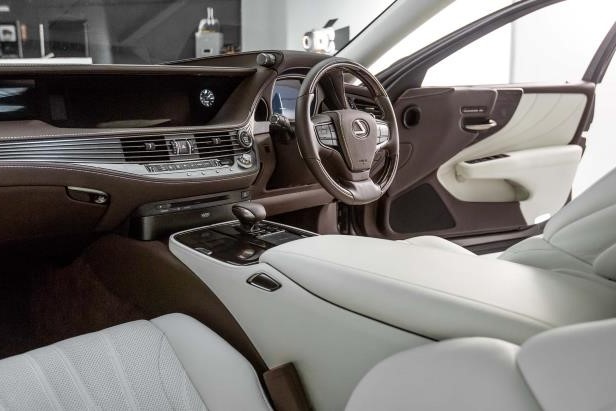 The 12.3-inch infotainment screen is controlled by a touchpad located near the armrest. A 23-speaker, 2400 watts Mark Levinson system does the audio duties inside the LS 500h. There is also a pair of rear seat entertainment system which includes 11.6-inch displays that automatically aligns with the seat position to offer excellent angle for easy viewing.  Lexus also offers a massive 24-inch heads-up display for the driver projected on the front windshield. The display is divided into different areas to bring information like driving support and navigation to the driver’s notice.

The front seats are really large and beautifully crafted to offer superior comfort; they are also powered and have massage functions. The powered rear seats with motors along with a newly developed pneumatic system that adjusts air pressure to make fine-grained adjustments to every aspect of the seats. The seats can be reclined up to 48 degrees to offer a first-class airline comfort on four wheels. There is a rear multi-operational panel at the central armrest which offers highly intuitive control of the audio, air-conditioning, seat and relaxation functions, control sunshades and cabin lighting. Space, do we need to elaborate? LS 500h has loads of it. 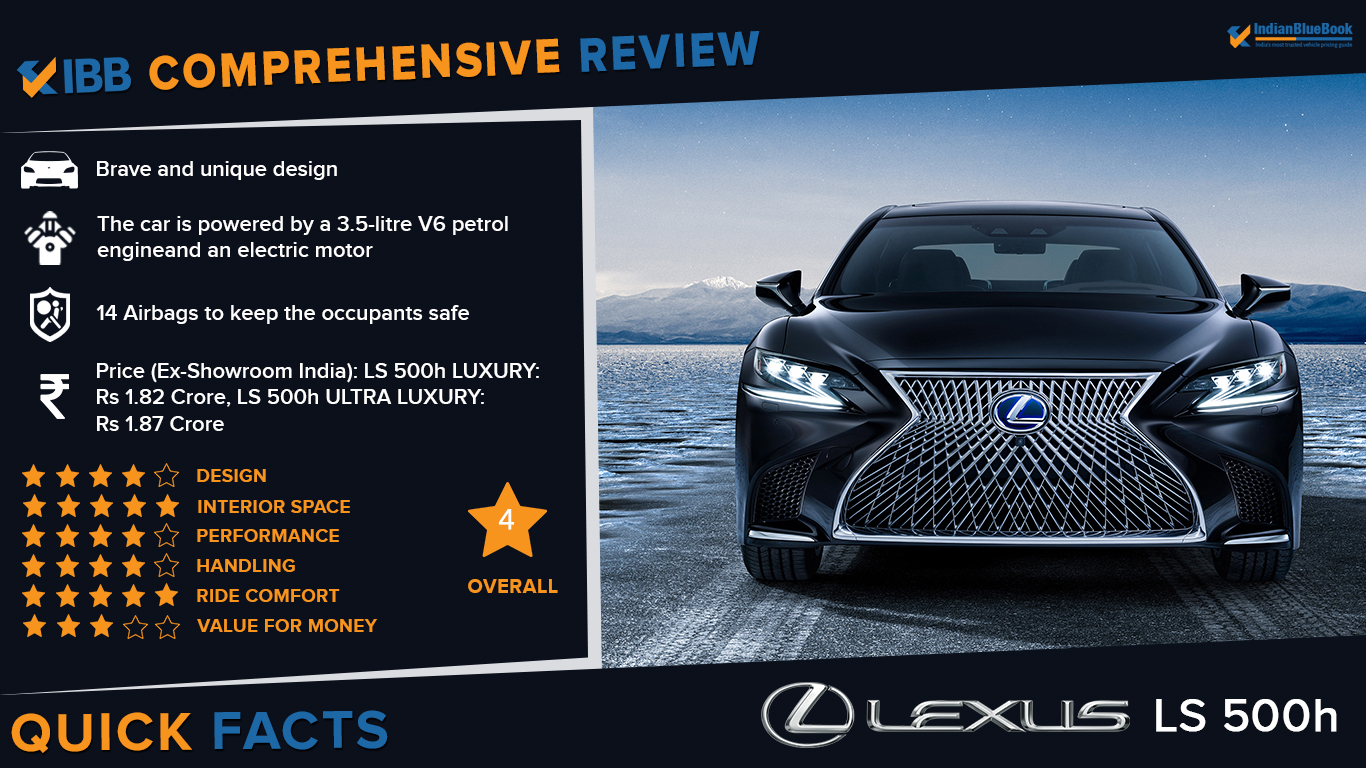 Powering the LS 500h is a 3.5-litre V6 petrol motor coupled to an electric motor, with a combined power output of 354hp on tap. The car is surprisingly agile for a luxury saloon and can touch 100 Kmph in just 5.3 seconds. The engine is mated to a four-speed gearbox that works in conjunction with a CVT auto gearbox to create the effect of a 10-speed gearbox.

The engine is surprisingly a little raucous when you push the pedal hard and there is a slight delay from the gearbox.  However, high-speed highway cruising is pretty relaxed and you can also hustle in the city exclusively pulling out power from the electric motor. Coming to fuel efficiency, the car has an impressive ARAI certified fuel efficiency of 15.4 Kmpl; thanks to the hybrid tech.

Understandably the suspension is set towards offering superior ride comfort rather than for outright agility. The car has a very plush ride and the car behaves reasonably well around the corners as well. The front system has double ball joints for both the upper and lower control arms, allowing control of the smallest movements caused by driver or the road surface. The rear system is a compact multilink design that provides the high level of stability and rides comfortably.

PUH (Pop-Up-Hood): The innovative PUH aids in pedestrian protection in the event of a frontal collision with a pedestrian. The sensors mounted on the front bumpers sends signals which instantly pops up the hood instantly to create a space to minimize the impact force on the pedestrian . 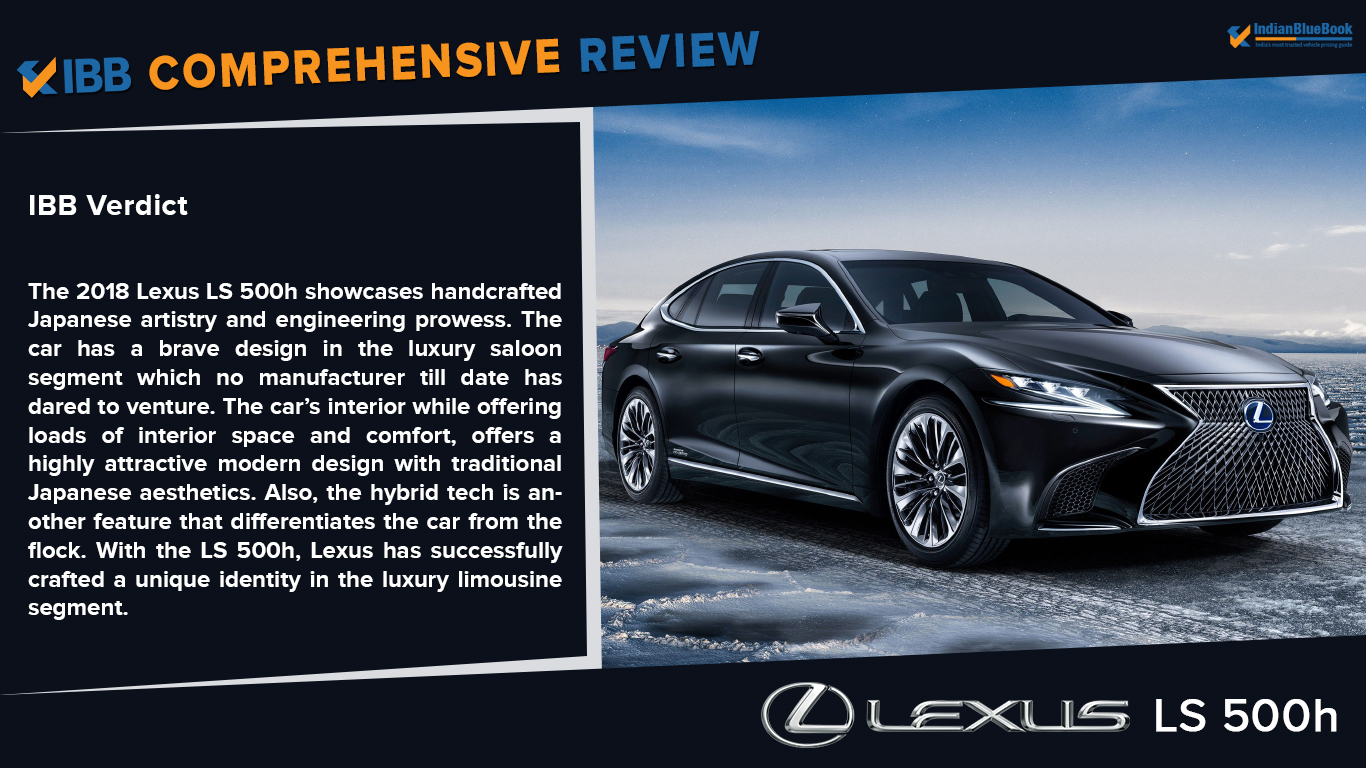