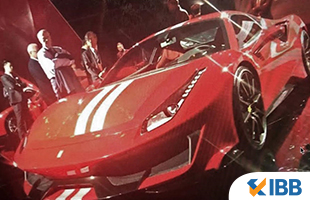 The Ferrari 488 GTO is now ready to be unleashed as the most hardcore and track-focused model of the car. The full front styling of the car has, however, leaked onto social media. The name of the car has not yet been revealed though it would not be a moniker that has ever been used by the brand in the past. The car would actually be a hotter version of the 488 and would perfectly rival the Porsche 911 GT2 RS and would be a replacement for the discontinued 458 Speciale. The Speciale had been regarded as driver-focused. The new car has been spotted being tested outside the Maranello base of Ferrari.

Through the leaked specifications, it has been seen that the car uses a 710 hp engine that has been obtained from the motorsport. The company has not said a word about the existence of the model. However, through the timing of the leaking event that might have been caused by a dealer event, there might be a revelation at the Geneva motor show. There are images that had been posted showing the supposed interior of the cars and there is a mention of the engine on the 488 Challenger racer. It is the marque's most powerful V8 engine, about 10 percent lighter than the 488 GTB's engine.

The torque had been increased to 761 Nm and the 488 would be offering a mid-mounted twin-turbocharged 3.9-litre V8 engine that would be boosted with increased turbo pressure and the internal modifications. There would be an extensive use of carbon fibre products inside the car. There would be bumpers, bonnet and rear spoilers that would be made from the same material. Large sections of the cabin and dashboard would be made from the material. The car would have a bigger front lip and a prominent rear diffuser. There would be a 20 percent improvement in the aerodynamic efficiency of the new model. The car would be opting for a new trend set to continue to be road legal.