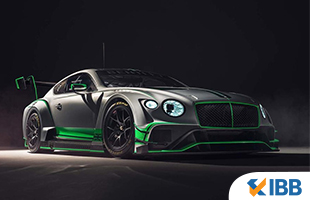 Bentley has showcased the Continental GT3 race car officially and this track-ready vehicle is a precursor to the eagerly awaited new Continental GT for regular roads which should launch by 2020. The new Continental GT3 race car is lighter than the road version by close to 1,000 kg and comes with a V8 4.0 litre twin-turbo engine that dishes out 550 hp. The earlier GT3 came with the same engine albeit in a tuned avatar with extra power and higher weight. M-Sport from BMW is the collaborative partner for this model.

Kerb weight has gone down by 950 kg approximately and Bentley has claimed overall weight lower than 1,300 kg. This is a huge reduction in comparison to the 2,250 kg weight of the W12 road version. The bodywork looks more aggressive in comparison to the regular Continental GT, particularly for the wider wheel arches, deeply integrated front spoiler, massive rear wing and aerodynamic fins. Every component has been aerodynamically optimized and is lighter than its corresponding component used for the regular car.

The GT3 comes with a six-point harness and FIA-spec roll cage while there is race-spec ABS with a lightweight racing battery and traction control. There are racing dampers which are four-way adjustable and a propshaft crafted from carbon fibre. Bentley is pinning its hopes on the Continental GT3 for finally emerging victorious at the Blancpain GT Series. The car will be available for buyers from June, 2018, onwards. The car will be racing for the first time at Monza on the 21st of April, 2018, for the 2018 Blancpain Cup’s opening round.