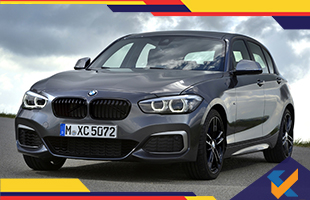 BMW is all set to push its front wheel drive in high gear by 2019 and the first step towards this comes with the launch of BMW Series 1. The next gen M130iX will come with four-wheel drive in the aim to prove that they can provide credible front-driven performance model as well as the traditional rear-wheel-drive M cars. The car is in its early stages of development with the aim to outshine its competitors in the market like Volkswagen Golf R, Audi S3 and upcoming Mercedes-AMG A35.

The car will feature turbocharged 2.0-litre four-cylinder petrol engine capable of generating 304hp of power along with a multi-plate-clutch xDrive four-wheel-drive system. In addition oto this the series 1 may receive one mild-hybrid drivetrain with a turbocharged 2.0-litre four-cylinder petrol engine fitted with an integrated starter motor along with a 48V electric system. It may even adopt a particulate filter which will allow the model to reduced level of CO2.

The new series 1 will come with a lower kerb weight and improved packaging and is expected to generate greater profitability than the rear-wheel-drive car. The structure is a class above from the UKL platform that underpins the 2-series Active Tourer, 2-series Gran Tourer, Mini line-up etc. On the exterior front the front-wheel-drive platform car will retain the same design and cab-back influences.