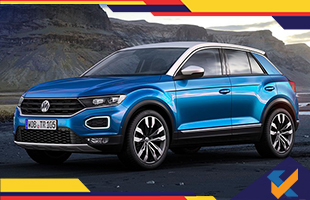 Volkswagen is currently undergoing the process of adding the finishing touches to the T-Cross, its smallest SUV, for global markets. The Volkswagen T-Cross SUV, in all likelihood, will be revealed in the latter part of this year. Previewed by a convertible T-Cross Breeze SUV concept at the Geneva Motor Show last year the Volkswagen T-Cross will be positioned below the Volkswagen T-Roc. The production version of the T-Cross will be equipped with Volkswagen’s signature full-width grille now seen on most of the new-gen models of the carmaker. Buyers can also expect wider wheel arches for the rugged VW SUV look earlier seen on the larger Tiguan and the T-Roc.

The T-Cross will be underpinned by the carmaker’s MQB A0 platform. Interestingly, the latest-gen Polo hatchback and few other models are also based on the same platform. The engine and gearbox configurations of the SUV will also be the same as those of the new Polo. Coming to the engine, the production T-Cross is likely to come with the same 112hp, 1.0 litre TSI three-cylinder petrol engine powering its front wheels. The engine will be mated to a seven-speed gearbox. The buzz is that, the entry-level unit of the production car will be joined by two turbocharged four-cylinder engines.

As far as the Indian automobile market is concerned, it will get a derivative of the MQB A0 platform which will be called the MQB A0 IN architecture. This will underpin a range of Skoda and Volkswagen models which could encompass SUVs, sedans and hatchbacks. Skoda will first build an SUV on this platform to rival the Hyundai Creta. This new SUV will also have a Volkswagen equivalent; however, in an endeavour to bring down costs remarkably, which is a prerequisite to foray into the Indian market, the Skoda and VW SUVs could share some body panels along with engines and drivetrains.