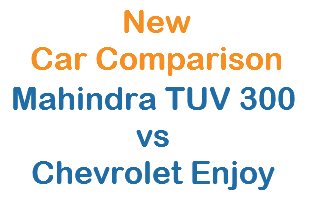 The Mahindra TUV300 is both an SUV and MUV combined into one. This relatively new entrant from the Mahindra stable is a well-designed and performance-oriented vehicle that is making good in-roads into the auto market. The vehicle’s success further bolsters Mahindra’s presence in the toughly contested SUV segment in India. After the successful runs of the Mahindra Scorpio and the Mahindra XUV500, this is one more that is added to Mahindra’s growing vehicle portfolio. The vehicle’s design is what sets it apart from competition. Its butch like appearance and the overall ruggedness just increases its appeal and reach with the vehicle appealing to both the young and the old alike. This 1500cc vehicle is set to take off and riding a favorable wave and with indications suggesting that the TUV300 could also be a successful model for Mahindra.

GM India recently launched the revamped, updated version of the MPV Chevrolet Enjoy. Accordingly, both noticeable and understated changes were made to both the interior and exterior of the vehicle. Excepting of course, the engines, specs and most features for both the petrol and diesel variants stayed the same. With renewed touchups and an extended 3-year warranty or 45,000kms whichever came first, GM expects the updated vehicle to make its mark in the Indian auto market.

Butch like appearance, rugged, muscular and an overall macho persona is what describes the Mahindra TUV300. Its styling is distinct and interesting. The very apparent body lines and the large bonnet are noticeable. The rear end wears a more conservative look which is augmented yet looks minimalistic and effortless. The squared wheel arches and the headlamps also add to its overall tough stance.

The changes in the exterior of the Chevrolet Enjoy aren’t as apparent as in its interiors. Chrome accenting and the B and C pillars are blackened and therefore, these changes are apparent and give the vehicle a better look than its predecessor. The top variants wear alloy wheels while the base variants wear steel rims. A couple roof rails, a more swept-back design in the headlight placement area and roof rails add to the appealing looks of the MPV.

The layout and placement of the dashboard is neat and nice. And the dual toned color scheme of black and beige somehow seems to suit the overall persona of the Mahindra TUV300. The BlueSense technology featured into the music system and the MicroHybrid tech is a definitely a first in this segment and it is placed so as to improve overall efficiency. Cabin spacing is roomy and comfortable and there is good legroom and headroom too. The boot has good spacing and what is nice is that dual airbags are available across all variant levels. All through the interiors, the equipment and the features, there seems to be a touch of chrome which is also another highlight of the TUV300’s interiors.

The Chevrolet Enjoy is offered in both 7 and 8-seater options. The steering wheel design is new and the audio control switches are incorporated into the steering wheel. Though, the overall interior design is relatively untouched, yet there are seemingly obvious changes as in the upholstery, the chrome inserts on the door handles, the gear knob and more. Advanced features that add to comfort and luxury are incorporated and the seats have headrests that are adjustable. A two-toned color scheme seems to go well with the overall interiors. The changes in the right direction make it a very comfortable vehicle to travel in.

Though, on the face of it both these vehicles come under two different vehicle categories, yet the comparison element is still there. And the verdict and the vote would definitely go in favor of the Mahindra TUV300. A refreshingly, new vehicle, it is definitely a departure from the many regular SUVs and MUVs out there and as it is a relatively new entrant, and owing to its design, performance and packaging, the vehicle seems to have already made an impact in the right way.