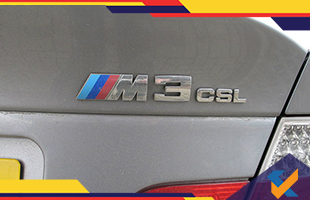 The iconic CSL moniker that had previously used by the automaker BMW is going to be brought back by the company. Thus the GTS badge would be replaced from the 'M' range of coupes. The CSL badge is just an acronym for the category 'Coupe Sport and Lightweight'. The BMW, looking at the motorsport heritage of the 1960s, would soon be reviving the old and iconic CSL moniker in a major throwback. It would be designated on the appropriate M-spec cars. 'Coupe, sport, lightweight' is totally from BMW lingo.

Reviving the legacy
The CSL badge had been seen for the very last time in 2003 model of the BMW M3. As the name goes or the acronym of the CSL, the badge should not be seen on the SUVs and the crossovers having the M badge. One of the spokesperson from BMW has commented that the CSL badge would be seen on some of the M cars by replacing the 'GTS' tags on them.
For an instance, the BMW M4 would definitely be having a CSL badge somewhere in the near future. This is because the M4 is in the category if coupes. There could be a lot of others examples as well. However, an interesting fact is that the M8 CSL has been trademarked with the M2 CSL and the M4 CSL.

The CSL logo legacy
The CSL logo surely has a lot of legacy behind it and the company is trying to revive that and remind its customers what the German automaker has represented throughout its journey. The legendary badge was designed when the company had built the 3.0 CSL. It was a homologation car which had enabled the company to take part in the European Car Championship that had taken place back in 1965. BMW AG had to sell at least 1000 units of the homologated car to take part in the historical racing series that year. The capacity of the first CSL badge car ever produced was 3003 cc and the in-line 6 engine produced around 200 bhp at 5500 rpm. The car could reach a top speed of 220 kmph. It could also make the 0-100 kmph run in a matter of just 7 seconds. The car did have an 'M' badge. However, there are many purists who are of the notion that this car, the 3.0 CSL was also the first ever M car. The car had the tri-colour as well.

Considering everything, BMW is making groundbreaking progress this year and is surely going to surpass all expectations this year. With the Annual General Meeting being concluded recently, the brand has made a lot of new and bold decisions including the desire to relive old legacies. It can be said that the automaker is ready to make new progress in terms of automobile technology but it does not want its fan base to forget the important milestone that it has crossed through the years. The revival of the CSL moniker is an important step in that direction.