As confirmed by the company insiders, Audi’s upcoming E-tron electric SUV will use the world’s first virtual external mirrors. Thanks to this setup, the car’s aerodynamic drag coefficient will be reduced to just 0.28. The ‘virtual’ mirror setup uses cameras in place of conventional door mirrors, which will project digital images onto screens located inside the car, where the front doors meet the dashboard. The mirrors will help reduce the e-tron’s width by 150mm and will also help in cutting down the low wind noise. 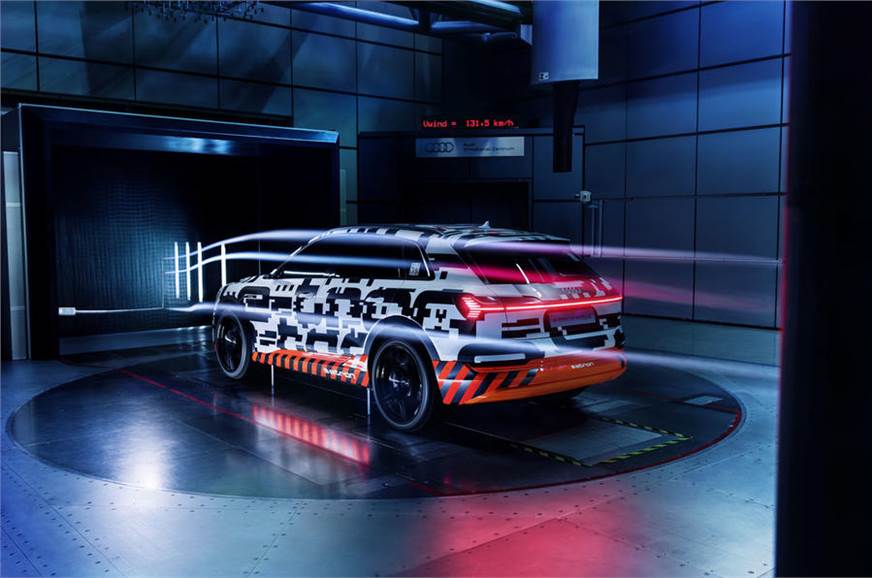 In combination with active aerodynamic and air suspension, these more compact exterior cameras can lower the car into its most aerodynamic position when cruising, giving the car a claimed drag coefficient figure that makes it 0.04 slipperier than the smaller Q2 SUV. The new virtual exterior mirrors are much narrower than the standard ones, and can be adapted for various driving situations, thus significantly enhancing safety. The MMI system offers three views, for motorway driving, turning, and parking.

Another factor which comes into play is the standard adaptive air suspension. At speeds above 119kmph, the body is lowered by up to 26mm below the normal position, thus reducing the drag. While the wraps would be lifted off the car in August, it has been confirmed that the car will be powered by a dual-motor powertrain using a 95kWh lithium ion battery and capable of 150Kw DC fast charging.  Going by the claims of the company, the latter is a world first and is 30kw more rapid than Tesla’s Supercharger network.

Audi says that the E-tron can charge fully in 8.5 hours when connected to a 400V three-phase outlet. E-tron will be unveiled as the first of three battery electric vehicles (BEVs) that will be launched by Audi by 2021. The company promises to have 20 electrified models on sale by 2025, with half of them being BEVs.