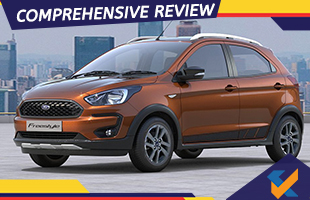 Ford Freestyle is a crossover based on their Figo hatchback. Ford calls it the Compact Utility Vehicle (CUV). The car is not just a Figo with a crossover appearance, there is more to explore. 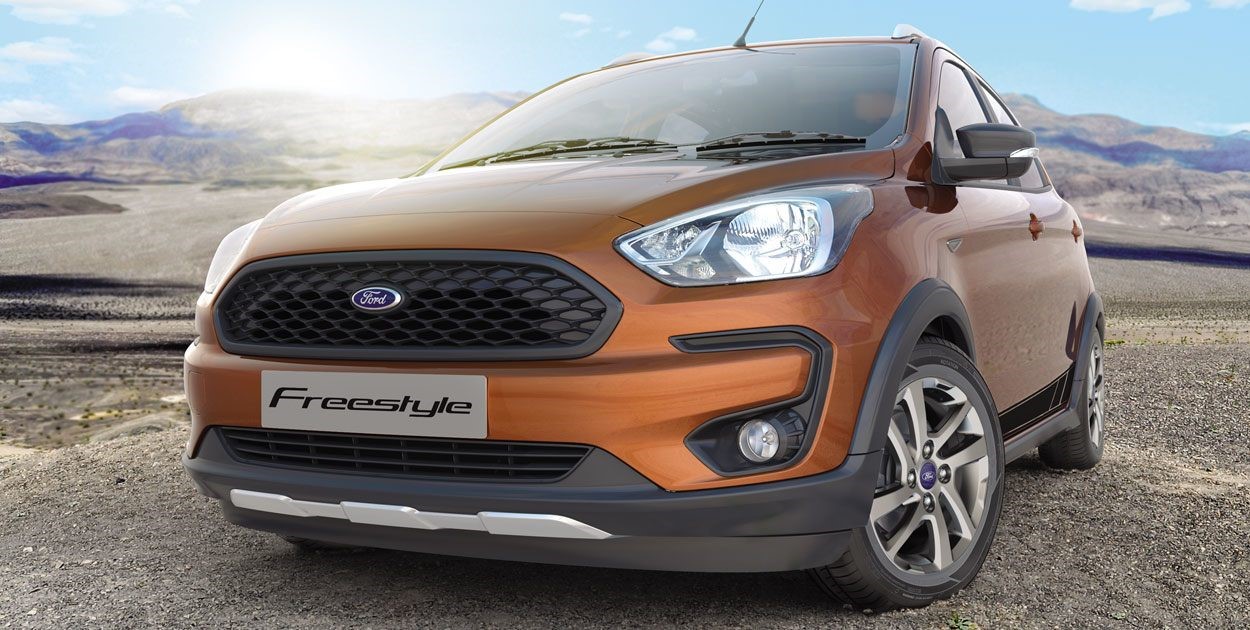 The Freestyle as mentioned earlier is based on the Figo style platform. However, Ford has injected just enough elements to ensure that it looks substantially different from the humdrum Figo. To start with, Freestyle gets a restyled bonnet, blackened headlights, black-mesh grille, and front bumper with sporty black accents and skid plate. This gives the car a much larger and sportier look than the Figo. You will quickly notice the increased ride height of the Freestyle (190 mm) compared to its hatchback brethren. The car also gets black plastics over the wheel arches, running board and black stickers on the lower portion of all doors (looks like an amateurish job but a lot better than the one spotted on the Figo-S).

The car gets bigger 15-inch alloy wheels with a new four-spoke design. The roof-rails at the top can support up to 50 Kg load, in addition, gives the car an SUV look. At the rear changes from the Figo hatchback is limited to a restyled bumper with black accents, rear skid plate and roof spoiler. The car is available in six colours: Absolute black, Canyon ridge, Moondust silver, Oxford white, Smoke grey and White gold.

Ford has invested some decent effort to make the interiors stand apart from the one in the Figo. The dashboard is finished in a unique chocolate + black colour scheme (definitely will split opinion). Also, the Freestyle gets a 6.5-inch touchscreen infotainment system on the top variants. You can pair your phone with Bluetooth and it also gets Android Auto and Apple CarPlay smartphone connectivity. 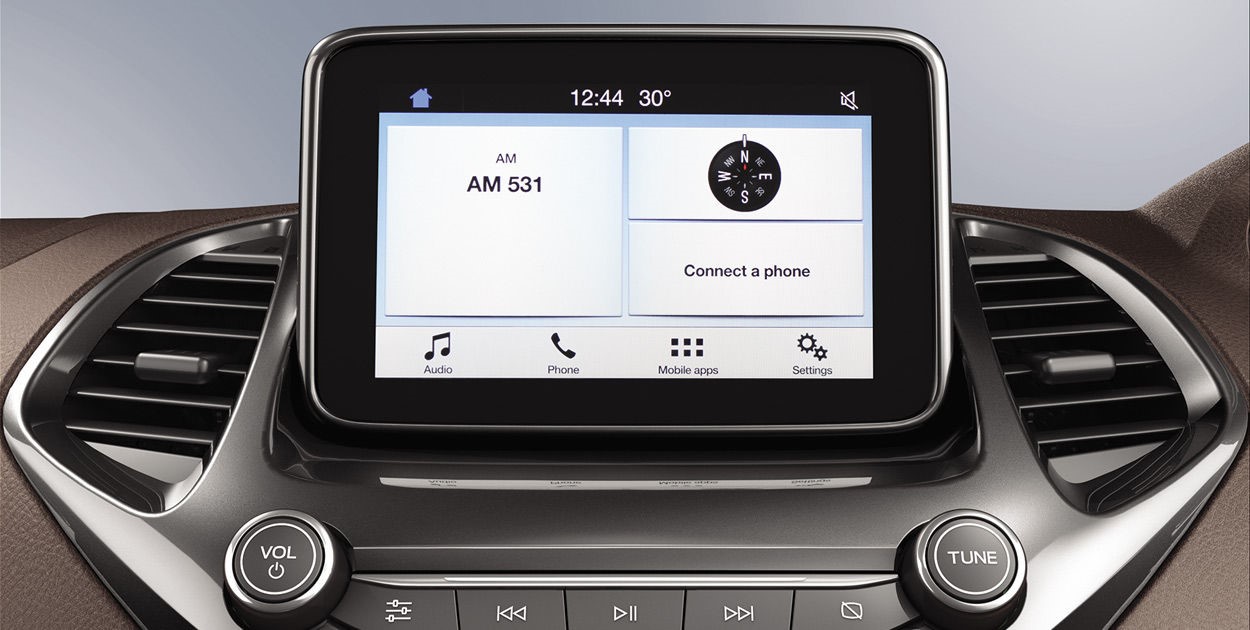 There are 12V power port and two USB ports on the lower portion of the centre console. The steering wheel is carried over from the Figo-Aspire twins and gets some piano black. However, we are not happy with the plastic quality used on the dashboard as well as on the door. The front passenger seats are pretty large and offer good support in all directions. There is sufficient legroom at the front as well as the rear. The rear bench is set a tad low and limits view especially for short passengers and kids. 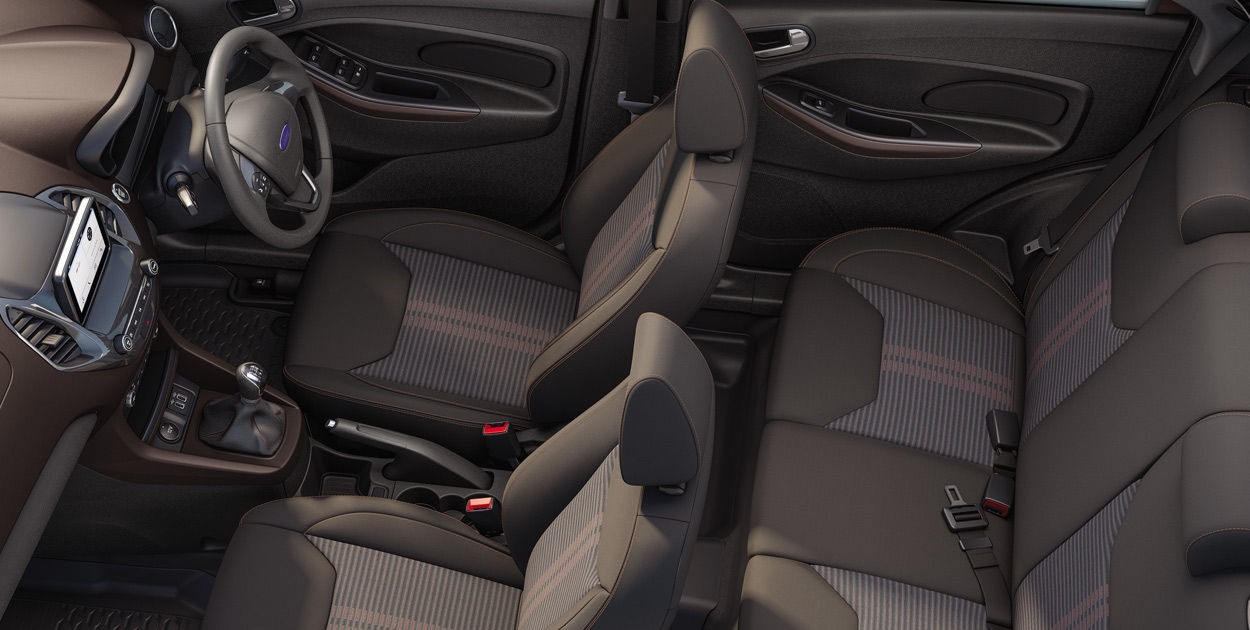 Let’s start with the new 1.2-liter three-cylinder Ti-VCT Dragon petrol engine; the naturally aspirated motor dispenses a peak power of 96hp @ 6,500rpm and peak torque of 120Nm @ 4,250 rpm. It is the most powerful 1.2-liter naturally aspirated petrol engine in the country. The engine is pretty peppy at lower rev ranges and has a wide power band unlike most of the smaller petrol power pots. There is enough oomph in the low as well as high rev ranges making it a great car to hustle in the city as well as a good highway tool. The engine is mated to a slick Getrag Ford five-speed transmission.

The 100 hp TDCi diesel engine spotted inside the Figo/Aspire also powers the diesel Freestyle. This engine has an impressive 215 Nm torque and you will never run short of power on this mill. The engine is known for its neck snapping and satisfying acceleration and when it comes to sheer performance it can put many bigger cars to shame, making it one of the most exciting diesel motors under the Rs 10 lakh price bracket. The diesel Freestyle is a joy to drive on the highways and offers great fuel efficiency; you can have the cake and eat it too! The engine is mated to the IB5 five-speed manual transmission. Shifts have a positive feel but nowhere slick compared to the transmissions spotted on the Suzuki and Hyundai cars. 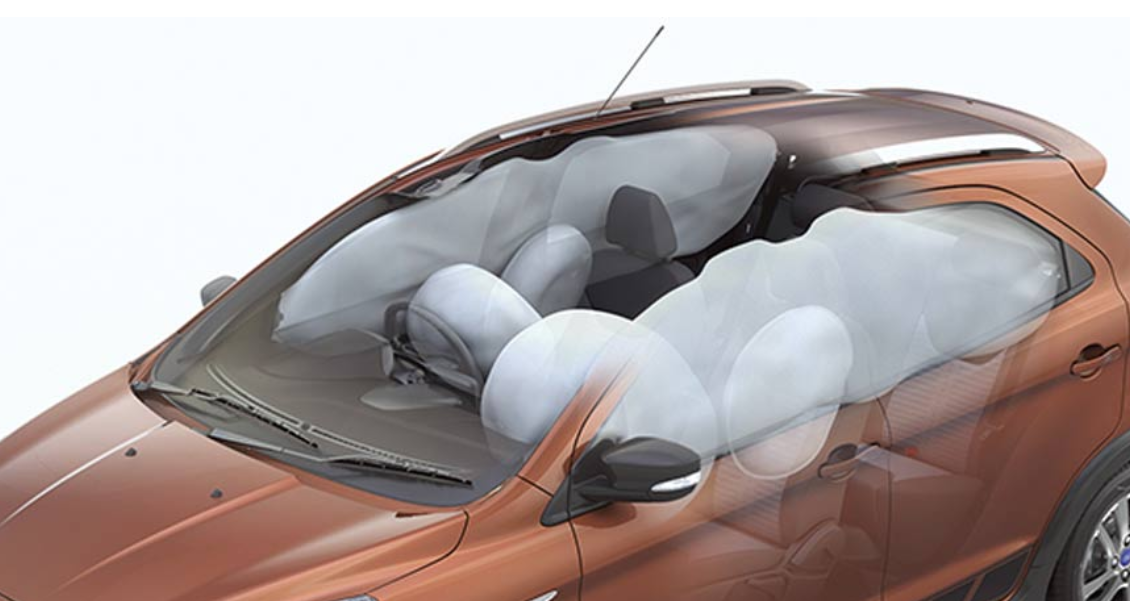 Also, this Ford handles pretty well. Definitely, there is some body-roll especially while going around the corners at high speeds. The tyres offer good grip and feedback to the driver. The steering wheel is also pretty responsive and instils that all important confidence to the driver to carry decent speeds into the corners. The brakes also offer great bite, feel and stopping power.

ABS+EBD and front dual-airbags are standard across the variants. The top Titanium+ variant gets six-airbags to keep the occupants safe in case of a collision. Reverse parking sensors are also a standard feature on all Freestyle variants. The rearview camera is offered in all variants except the base Ambiente trim. 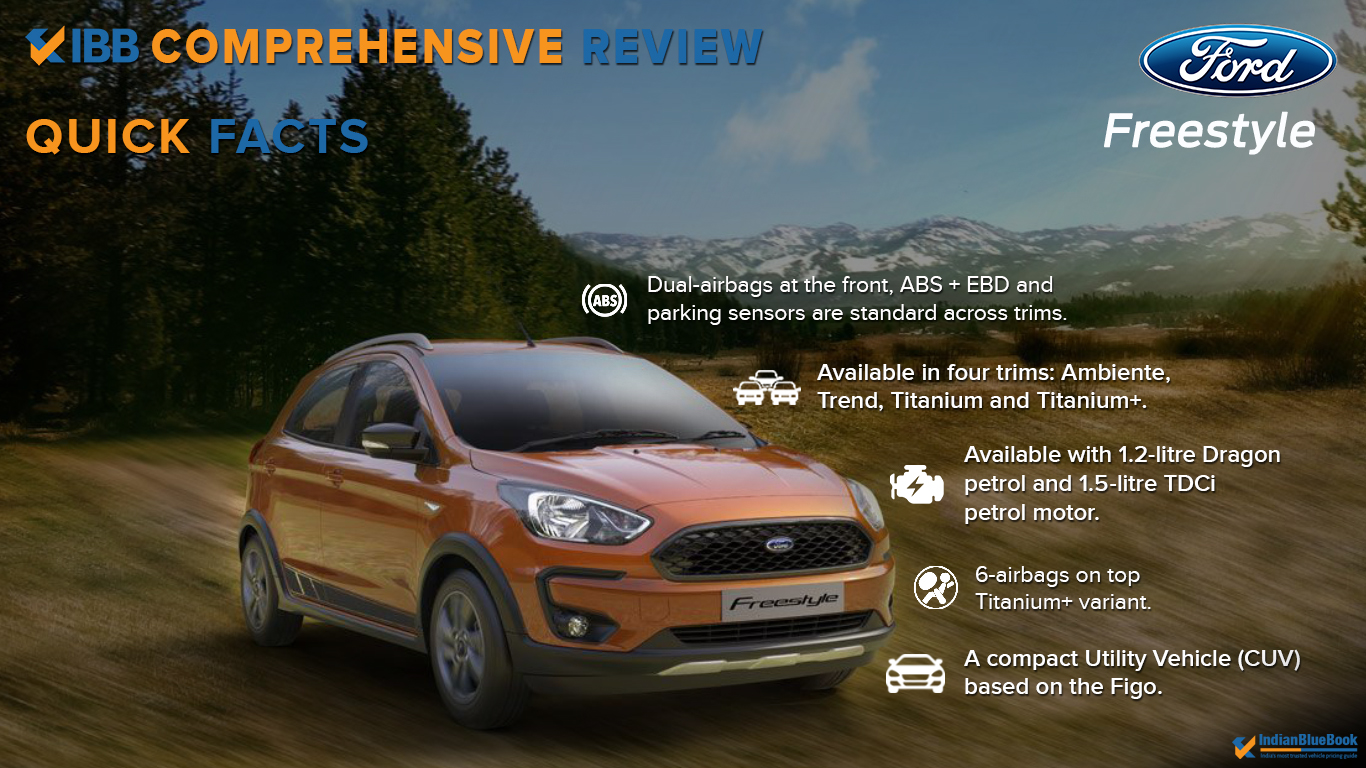 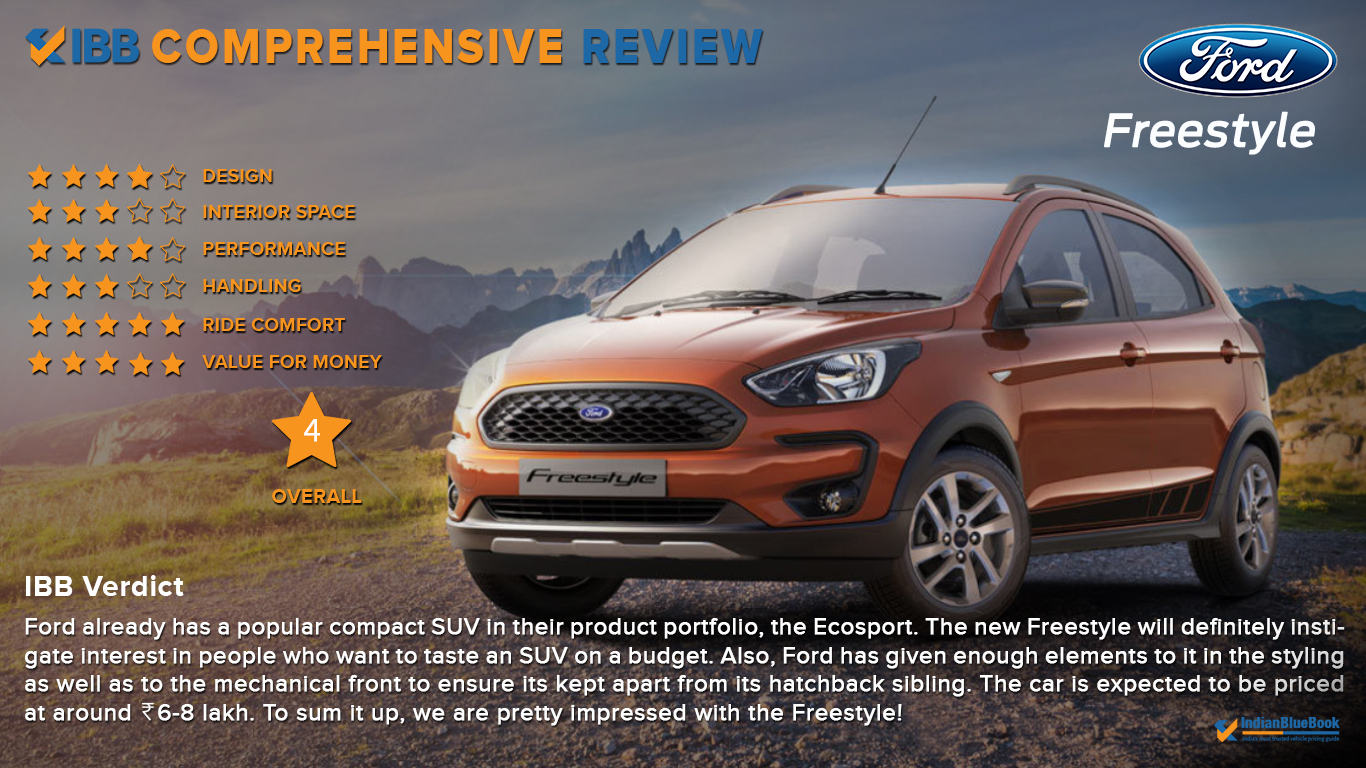