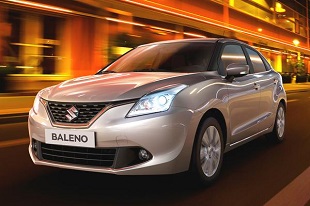 Maruti Suzuki Baleno was unveiled in the 66th IAA Frankfurt Motor Show. Maruti is all set to roll out it in India on 26th October 2015.

The car will be positioned just above the Swift and will be eying the market for premium hatchback category competing against the likes of Hyundai i20 and Honda Jazz.

The car will be sold along with the S-Cross through their premium line of Nexa showrooms. This car is based on a new generation platform from Suzuki.

The car carries forward the Swift design language with a blend of sleekness and curvaceous body.  The car sits low and wide compared to the Swift. The car doesn't look odd from any angles. The car has a unique V-shape grill which lends a unique character to the car. The headlights resemble the one on Swift but have some interesting elements inside with projector lights and DRLs inbuilt. The side profile appears like a slightly elongated swift and they have done it without an eyesore.  The car looks stunning from the rear quarters. And it has a rear quarter glass which is unique and adds up the style quotient.  The car resembles the new Alfa Romeo Giulietta hatch from that angle. The car looks more beautiful in dark shades.

All were expecting Maruti to carry forward the design theme of Swift on the Baleno, but thankfully it's not the case. The interior has but no resemblance to the Swift and adopts a V Shape design resembling the front of the car. It adopts an all black theme with some brush metal accents thrown at the right places giving the interior a clean and sporty character. The center portion houses a capacitive touch screen which is carried forward from the S-Cross and other AC controls below it. The car shares a lot of parts from the Swift Bin like the steering wheel and power window switches. With Ac vents on two sides and V-type base, it resembles the Batman logo. The instrument cluster has a bluish hue similar to S-Cross with a large display between the tachometer and odometers.  The car has good interior space thanks to its 2520 mm wheelbase. The car has a 355 Liter boot which is pretty spacious but the higher loading lip plays a little spoilsport.

The major highlight of the car in the Frankfurt motor show was the all new 1.0 Liter Boosterjet Di turbo petrol engine on the Baleno. Strapped with a turbocharger this engine generates a max power of 110 bhp coupled with 170 NM torque.  But Maruti will not be bringing this engine at least for now. The Indian model will come with a 1.2 Liter K-series Motor and 1.3- liter MJD diesel dishing out 83 bhp- 115 NM and 74 bhp – 190 NM torque respectively. A five-speed gearbox will undertake the transmission duties on both diesel and petrol models.

The car will come with four variants namely Sigma, Delta, Zeta and Alpha. Being a premium hatch, we expect Maruti to load the Baleno with equipment and feature comforts.

Many things go in favor for the Baleno. Attractive styling, spacious and quality interiors, good boot space and Swift lineage to name a few. The huge base of Swift owners looking for an upgrade will seriously consider the Baleno as a worthy upgrade. You get a bigger car with better interior space and features retaining the inherent fun to drive factor of Suzuki cars. With an attractive design coupled with premium interiors and premium customer experience from the Nexa Showrooms (Maruti has confirmed that Baleno will be sold thru the Nexa showrooms) this car will be a serious competition for the current segment leader Elite i20 and the versatile Honda Jazz.