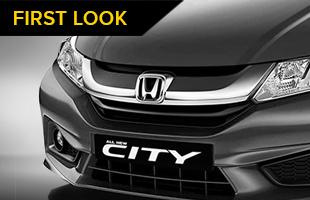 Honda is all set to launch the Honda City facelift on 12th January 2017 in Thailand; itt is basically a cosmetic upgrade on the existing model available in India. Currently, Honda City is facing stiff competition from Maruti Suzuki Ciaz, Hyundai Verna, VW Vento and the Skoda Rapid in the sedan segment. Hyundai will also be launching the new version of the Verna shortly.

The major changes on the face are the bigger grille which is similar to the existing Civic sedan, restyled headlamps with integrated DRLs, a restyled bumper with edgy elements around the air intake and black cladding around the area housing the round fog lamps.

The side profile remains more or less the same as that of the older car, 16-inch wheels instead of the 15-inchers differentiate the 2017 model from the existing one. The rear lamp design remains the same; however, LED strips have been inserted to impart an upmarket feel. The rear bumpers have been slightly tweaked to give a sharper look complementing the overall theme of the car.

The basic interior design will remain the same but Honda will be replacing the hard and scratchy plastics on the existing City with more upmarket materials. Also, there will be a touchscreen infotainment system with Android Auto and Apple carplay capabilities. The car will also get 6-airbags on the top variant.

With the new City, Honda will be eying to get the top spot back in the sedan category. Pricing will play a major role in the success of the new City in the Indian car market.