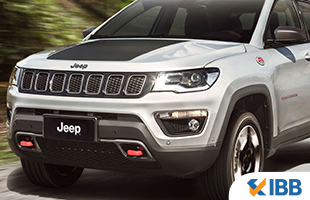 Jeep India finally is launching the much awaited Jeep Compass in India in January 2018, priced between INR 14.95 lakh to INR 20.65 lakh. The car is available in both diesel and petrol engine versions along with two transmission options. Jeep India has already received 5,000 bookings for the premium compact SUV in India since its official unveiling. The officials have reported that it will be limited to the diesel variant while petrol variants of the SUV will be delivered from September 2017.

Further information states that the company will introduce a 9-speed automatic gearbox on the diesel variant. However, we feel the company will continue with the 7-speed DDCT transmission as introducing the 9-speed AT will result in higher costs. The engines on offer with the car include a 1.4-litre petrol that produces 160 BHP and 250 Nm of torque and a 2.0-litre diesel which actually develops 171 BHP as well as 350 Nm of torque. While, a 6-speed manual gearbox is available as standard with both engines, a 7-speed dual-clutch automatic is only available in the petrol variant. Hence, a buyer can expect a great number of lucrative features from this model.

There is a 7-inch UConnect touchscreen infotainment unit on offer with Apple CarPlay and Android Auto capability. Then there is dual-zone climatronic A/C, Selec-Terrain system and AWD as well. If such gains do result, then Jeep Compass diesel automatic will make for a good purchase proposition upon launch.

There are many other features that would definitely catch attention of potential buyers.

Certain changes to the Compass and also to give it a new automatic gearbox have been made under the skin. Aside from the drivability of the car and the engine’s tractability, the automatic gearbox should not result in any increase or decrease in any dimension of the car. The car is offering alluring features that is attracting buyers in rapid speed. With six airbags on offer on the top trim, it will make for a safe car too. So, in terms of comfort, or safety or capability, there is little chance of the Jeep Compass Diesel Automatic not being as capable as the diesel-manual gearbox-equipped car.