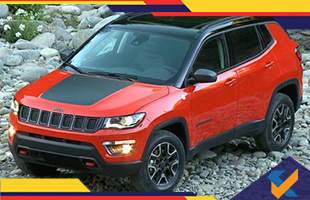 Much to the delight of automobile enthusiasts, bookings have started for the latest variant of the Compass, the Jeep Compass Trailhawk, a promising offering from the Indian arm of the American carmaker, Jeep India. Interestingly, the India-spec model was recently snapped in the country without any camouflage which suggested that the launch is near. The fresh images also hinted at the possible colour options to be offered by the carmaker. The off-road version of the Compass will be available in both petrol and diesel versions at the time of its launch.

The range-topping variant of the Compass, the Jeep Compass Trailhawk boasts an array of new features and off-road equipment. As far as the design is concerned, up front, it gets refreshed front and rear bumpers and the chrome is replaced with satin metallic black at the front and on the side accents. The front bumper flaunts dual tow hook setup, while the rear one gets only one. Further, a blacked out Jeep badging in red accents has taken the place of the Compass badge. The boot lid is accompanied by the extremely large ‘Trailhawk’ badge and ‘Trail Rated’ badging on the side fenders. Buyers can also expect a new set of wheels as the standard one gets replaced by the 17 inch Trailhawk exclusive two-tone alloy wheels.

Coming to the interior, the Jeep Compass Trailhawk flaunts a combination of red and black in the cabin as well. The car will bowl you over with its premium all-black leather interior with red highlights which add to the chic factor. The seats come with the Trailhawk embroidery as well. The touchscreen infotainment system gets both Apple CarPlay and Android Auto.

Under the hood, the Jeep Compass Trailhawk will be accompanied by both petrol and diesel engines. While the 1.4 litre petrol version will come with 6-speed torque converter, the 2.0 litre MultiJet engine is likely to feature 9-speed automatic gearbox. The Trailhawk also gets the company’s Selec-Terrain Traction Management System along with an option for the new ‘Rock Mode’. Buyers will have to shell out around Rs. 1 lakh more than the current top-end variant of the Compass. The Trailhawk is expected to be priced at about Rs. 23 lakh (ex-showroom) and will rival the likes of Volkswagen Tiguan and Hyundai Tucson.