The Maruti Suzuki Wagon R hatchback was released in 1999 and to date, its popularity has not waned, and it is consistently holding fort and doing well, irrespective of other competitors’ and also new releases. This vehicle has definitely been a surprise hit for the Indian automaker, Maruti Suzuki. What worked in its favor was its tall-boy design, performance and pricing and it somehow appealed to a wide-ranging audience. 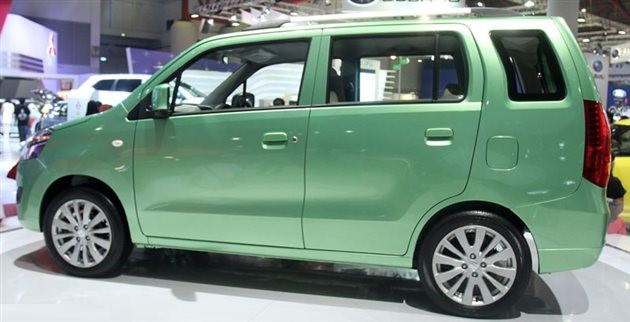 Riding in this crest, Maruti Suzuki decided to launch an MPV version of the Wagon R hatchback. The design elements and certain components are the same and it definitely features the quirky tall-boy design and it is a 7-seater. In fact, this MPV can be considered the third generation of the Wagon R. It was featured in the Auto Expo 2016 and its launch in the Indian market is much awaited. A very practical vehicle, it will be offered in both petrol and diesel versions. It has a high ground clearance and it will be placed as a mini MPV just below its sibling the Ertiga.

The Maruti Suzuki Wagon R MPV falls under the sub-4 meter category for SUVs, crossovers and MPVs. The Wagon R MPV has made the basic changes that befits an MPV and otherwise has stuck to the original design plot in the Wagon R hatchback version. There are no apparent or extensive changes made to its exterior, it definitely has good ground clearance and keeping in mind its popularity, and market presence, the automaker has not deviated a lot from the original.

The interiors of the new Wagon R MPV are practical and utilitarian at best. There are not too many changes from the hatchback interiors but definitely as this is a 7-seater, the seating and spacing will be different. It is comfortable and adequate too. But boot space may be a little tight and in the event, the last row will have to be folded to create more luggage space. Some added features like a power steering, an advanced instrument cluster, and more features and storage spaces could be in the offing.

The Maruti Suzuki Wagon R MPV is offered in both the petrol and diesel engine trims. The petrol engine is a K-Series 1.0L engine that operates on a 5-speed manual transmission. The diesel version comes in a 0.8L DDiS engine. The engines offer a good mileage and are very fuel-efficient too, which is anyways a notable feature of this series. Both the mills are compliant with BS IV emission norms and are set on a double overhead camshaft valve design arrangement.

The pricing of the new MPV, the Maruti Suzuki Wagon R is unbelievable for this segment. It is said to be priced as much as a compact sedan in the range of INR 4 lakhs to 6 lakhs. Its hatchback version is very popular and doing well in the auto market already. Interestingly, the MPV is only about 80,000 - 90,000 INR more than its hatchback. This 7-seater, MPV will definitely have a competitor lineup that it will hold its fort against. The Honda Mobilio, the Datsun GO+, its sibling the Maruti Ertiga, Hyundai i20 crossover and even the Toyota Innova to some extent.

The Maruti Suzuki Wagon R MPV debuted in the Auto Expo 2016. This Auto Show was held in New Delhi from February 5th to 9th 2016.

The expected date of release for the MPV version of the Wagon R is somewhere end of 2016 or even early 2017. Once this vehicle is released owing to its past popularity in the hatchback segment, it will definitely break bank and will be equally welcomed by consumers’ both in the urban and rural segments because of its established performance, design and of course its affordable pricing.