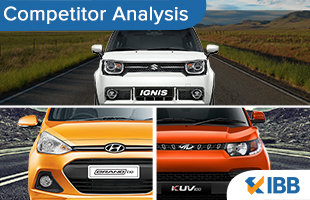 Maruti Suzuki started 2017 with a real bang with their Ignis. The car definitely stands for its tagline "None of a kind". It joined the new league of compact crossover segment, created by Mahindra's KUV 100. It was a bold move from Mahindra to come up with a car like KUV 100 and the design and positioning of the KUV 100 can be best termed as polarising. The template and positioning of KUV 100 worked well for Mahindra. Hyundai's Grand i10, though not as radical in design and postioning comapred to Maruti Suzuki Ignis and the  Mahindra KUV 100 competes with them as it falls into the same price bracket and it is the oldest trhving model in the trio.

Flat bold and beautiful. Ignis is the most radical and bold design Maruti Suzuki has ever attempted. The car can be best termed as a fine blend of flamboyance of the Swift and the practicality of the Wagon R.

The odd-ball styling of the KUV 100 was welcomed by many. The strong sales numbers registered by Mahindra with the KUV 100 is a testimony to the same.

One of the most successful cars from the Hyundai stable, the Grand i10 with the recent update is a major player in this price segment. It may not have the crossover-ish appearance of the  other two, but is one of the most proportionate design in this segment. Also, the car scores pretty high on practicality and space.