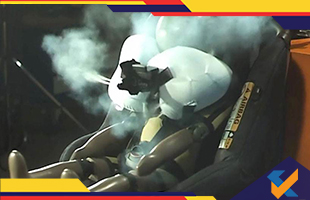 Safety features are the most important part of any product. The idea becomes more pronounced for cars with the government mandating the fixing of Isofix mounts. However, up until now there was no safety features available for child seats. The parent can now breathe a sigh of relief courtesy the new child seats that will be brought out by Maxi-Cosi and co developed by mobile airbag company, Helite which will have built-in airbags termed as AxissFix Air. This child seat is suitable for children between the age of 4 months and 4 years and would help reduce the number of fatalities and injuries sustained by children sitting in the back seat of cars on Indian roads.

The seat would feature Isofix tethers, a 360-degree rotating base, two small airbags mounted in the shoulder pads of the seat which would be deployed in about 0.05 second after a collision. It would help cushion the extent of impact and reduce the amount of stress on the child’s head and neck by about 55 % according to tests.