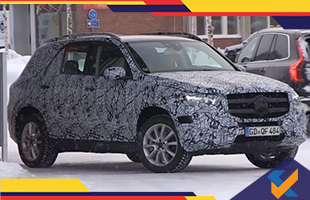 If you are awaiting the next launch by the popular luxury car brand, Mercedes then you are in luck as the company is all set to unveil their new Mercedes Benz variant, the Benz GLE at the Paris Motor Show later this year. The car has already been captured on spy cams during a test driving session in the snowy terrain. The new GLE has been is being built by their team of designers for the past 2 years and although the car is still camouflaged the leaked images give a fairly good idea about the new additions and upgradations in the car in terms of design and feature.

It will be built on MRA platform and will be larger in size. The images of the car give away very few details however one can easily make out a few features such as a new grille with twin slats, large functional roof rails along with new LED tail lamps, a pair of new LED headlamps with LED daytime running lamps, new set of alloy wheels, new rear bumpers and tailgate, new ORVMs, new infotainment system called the MBUX (Mercedes-Benz User Experience) and more. One still can’t be sure of the engine options but it is speculated that the will receive new in-line six engines and might be one of the new models to get the new flat-six motors.