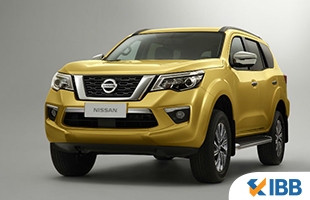 The Nissan Terra full-size 7-seater SUV has been shown by the company and will get its public debut at this year’s Beijing Motor Show. The Terra SUV is quite similar to the Nissan Navara pick-up with which it shares its underpinnings, interiors and front fascia design. The Terra SUV will be introduced in China and select Asian markets according to Nissan. There is no official confirmation on whether it will come to India or not. However, this could be a good bet for the Indian market since it will anyway take on the popular Toyota Fortuner, Ford Endeavour and Isuzu MU-X models in several global markets.

The Terra comes with chrome detailing for the tailgate and the rear is completely new. There are LED tail lights and the cabin gets the black treatment with a large touch screen infotainment system and compatibility with Apple CarPlay and Android Auto. There is also a multi-functional steering wheel and automatic climate control. The rear seats can be folded easily for getting more luggage space while there is also a twin-pod instrument cluster.

The car could get the 2.3 litre four cylinder diesel engine while the petrol 2.5 litre engine may be introduced sometime later. There will also be 6-speed automatic and manual transmission options available for the Terra along with AWD as per reports.