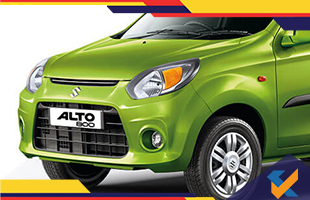 According to the makers, over 35 lakhs Maruti Alto have been sold up till now in India. It would not be surprising news to the Indian market as Alto has been one of the successful cars of the company. The story of the reliable and successful hatchback, Maruti Alto, started 18 years back. It is considered as India’s best-selling car of all time. Also, Maruti Alto has topped the list of best-selling cars in past 14 years. The success is attributed to the car’s friendliness to the budget as well as performance. Thus it was expected that the car would achieve the current feat soon.

The makers have acknowledged the fact that the sales have reached such new heights. According to the makers, the car has been a success since it was brought to the market in the year 2000. The memories are still refreshing like the car which is luring new customers every year. As per the data, Alto has added about 5 lacs, new customers, every two years. The company also pointed out that the stats numbered to 10 lac units in 2008, which rose to 15 lacs in 2010. In 2018, the sales have reached an astonishing 35 lacs.

As the years passed, Maruti Alto evolved through time. New features were constantly added to keep it fresh in the market. It is obvious that customer needs and demands changed with every passing year. But the car stood up to them, which has resulted in high sales. According to the company, 55% of buyers had preferred Alto as the first car. 25% of people have selected Alto as an additional car. In the year 2017-18, the growth rate of Alto was 6%. It had a market share of 33%. About 196342 units were sold amid the period of April 2017 and December 2017.

Moving on to further details, buyers of age below 35 comprises of about 44% of the sale. The numbers have risen by 4% in last three years. One of the reasons of its success is because it offers different variants. Currently, Maruti Alto offers two variants, namely 800cc and K10. There is also a CNG version of the car. K10 comes with an Automatic Transmission version which shares about 18% of the portion of sales. Initially, the car wasn’t a huge success as compared to its rival Hyundai Santro, Tata Indica and others. But the car managed to fight its way through to the top.