Revealing The All New Ford Figo 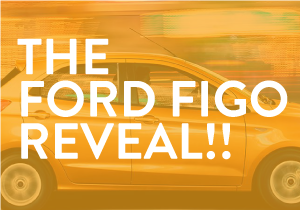 Revealing The All New Ford Figo

They say that happiness can be found in a hatchback. Well, they don’t really say that, but you get our point right? At Indian Blue Book, we love our cars and today we present to you the car that’s going to be launched today, the Ford Figo. The new Ford Figo is going to compete with the likes of Volkswagen Polo, Nissan Micra, Maruti Suzuki Swift and Fiat Punto. The new Ford Figo is taking the successful predecessor to the next level to take on the very competitive and crowded hatchback segment.

Ford has already created a lot of buzz with their ‘Ford Figo Aspire’ as it hit the ground running with its stylish new looks and superior claimed mileage. It was thereby a natural consequence that the new variant of ‘Ford Figo’ would also follow in the footsteps of the Aspire. With a strikingly new and different design and a bevy of trim levels, Ford’s revamped little monster looks all set to create some waves in the hatchback market.

Why should you consider Ford Figo? IndianBlueBook tells you why:

1. Pedigree: Ford Figo’s previous avatar was very impressive and customers latched on to it, the all new Ford Figo gives the much needed thrust to the hatchback brand which saw fading sales in recent years . ‘Ford, as a company and an automobile brand, has consistently evolved and aimed to deliver quality to its customers and potential buyers. Ecosport and Aspire are examples in themselves. What we’re trying to say is that a brand like Ford can be trusted and therefore, if you’re going to buy yourself a hatchback, Ford Figo should be on your consideration check-list.

2. Pricing: The Ford Figo has been launched at an interesting price point of 4.29 lakhs.

3. Safety: Ford Figo is the ONLY hatchback in India to offer up to six airbags

4. Engine: The new Figo comes equipped with the following two engine variants:
2 Litre Duratec Petrol Engine: An engine designed for in-city driving with a high low-end torque that increases the vehicle’s responsiveness and increases drivability and performance
4 Litre Duratorq Diesel Engine: An engine with a superior power to weight ratio that makes the vehicle incredibly responsive at lower speeds and ensures a high end performance

6. Interiors:
Interior Theme: The refreshed Ford Figo comes with a Cyber Blue Interior Theme.
Clever features: Figo is packed with all the premium features like MyKey, MyFord Dock, Sync AppLink,.
Air Conditioner: The new Figo boasts of a 'fast' air conditioner that's powered by a 154cc compressor. The makers assure you that the interior cools faster no matter what the temperature outside.
Bluetooth Audio Unit: The vehicle is also equipped with a Bluetooth audio unit that allows the driver to access his phone book, dial or receive calls in addition to seeing missed calls on display without having to reach for the phone.
Large Boot: The boot size is also impressive for a car this size with the volume standing at 284L.
Foldable Rear Seat: The rear seat can be folded flat to fit in larger luggage items.
Driver & Front Passenger Airbags: Will be the ONLY hatchback in India to offer up to six airbags

7. Average Fuel Economy Indicator: An interesting feature of the all new Figo is the AFE Indicator that displays an average fuel economy based on your driving style and fuel consumption

8. Mileage: The New Ford Figo has an unbelievable Mileage of 18.16Km/l on its petrol variant

We, at Indian Blue Book believe that that with all the aforementioned features spread across 4 trims, the new Ford Figo is going to get an impressive head-start with today’s launch and has all the potential to strike a chord with a potential buyer.

With a car that looks that stylish, equipped with a bevy of features and with a starting price of INR 4.29 Lacs, Ford has a clear winner on their hands and the competition may have something to worry about!