The latest Terrano by the Nissan got launched, equipped with a six-speed lucrative automated-manual transmission automatic version. Nissan Terrano is one of the most awaited cars from the stable of Japanese automobile manufacturer, which the company has announced to launch on the 9th of October this year. The car is loaded with a lot of incredible features for making this sports utility vehicle more comfortable and convenient.

On the outside, the updated Terrano features chrome-garnished front fog lamp housings, turn indicators on ORVMs which are now electrically foldable and a new body colour option - Sandstone Brown. The interior has a cabin where there is a new black-brown upholstery theme, 7.0-inch touchscreen infotainment system, new dual-tone fabric upholstery for the seats with a matching colour scheme for the door pads, updated steering wheel and audio controls behind the steering wheel and a driver’s armrest. The most surprising part is that Nissan has omitted the rear air-conditioning from the Terrano’s recipe.

The latest version is equipped with 10-spoke machine-finished petal shaped alloy-wheels. They feel premium but somehow look a little out-of-place on the muscular car. They will probably suit the Duster which is softer of the two cars. The Terrano gets the same stance and structure of the Duster but looks more up market than the same. Especially from the front that gets a chrome grill typical of Nissan’s family of SUVs. Terrano’s rear gets a different hatch that bisects the tail-lamps and looks sharper than the Duster’s. The Nissan Terrano is also perfect for the business class and adventure loving people. It is a good combination of power, comfort and performance.

The interiors of the Terrano also look familiar to that of the Duster. The equipment list is pretty much the same including the one-step driver height adjust and orange backlight for the instrument cluster. It also gets a rear AC vent that adds to the comfort of passengers, but it is a tad bit noisy increasing the NVH level. The Terrano gets a beige-brown combination that makes the cabin look roomier. It has ABS-EBD-Brake Assist, driver side airbag, music system and front fog lamps for the base petrol and the higher trims get dual front airbags for safety.

Utility feature makes it more comfortable. Terrano gives the best of the interior features that make it so very alluring. Engine performance is as per requirement. Luggage space is worth mentioning. All terrain drives to make it smooth with road or without road. The company has given it an impressive interior cabin with a lot of good aspects. This upcoming vehicle is loaded with 1.5-litre diesel engine with four cylinders, which are capable to deliver a very power packed performance.

It has possibly the best road presence amongst any SUV in this class. Drive feel is car like which makes it convenient for city drive as well. Occasional off roading is an added bonus. Nissan should do something about the placement of window winder switch on the rear seats. It has high safety measure equipped with it. The Terrano gets a standard driver side airbag and ABS and EBD in the second (XL) variant. Noteworthy is the fact that the Duster gets the same features in the RxL (O) variant.

The Nissan Terrano comes with an array of safety features, which ensures the safety of the occupants in accidents. New Terrano is bestowed with impressive safety features such as front fog lamps and a rear defogger along with a wash and wipe function incorporated in the rear wind screen, which help in giving better visibility in rainy and overcast conditions. Other safety features include a highly advanced anti lock braking system along with an emergency brake assist besides electronic brake force distribution mechanism as well and a stability control module. Then the company might also include impact sensing door unlock and engine protective under guard as well.

Nissan Terrano gets a frugal diesel engine. The car returns anywhere over the 15kmpl mark even if driven with a heavy right foot. A great applause to Nissan for getting the variable that matters the most to Indians perfect. Nissan Terrano gets inline 4-cylinder 1.5 litre diesels that available in two different power trims on is frugal 85bhp version while the other is a more powerful 108.2bhp variant. These produce a peak torque of 200Nm and 248Nm, respectively.

Terrano also gets the diesel engine in two states of tune, an 85PS motor and an 110PS one. The 85PS configuration doesn’t get the top end power that the 110PS engine gets, while the 110PS version lacks the initial poke and turbo kicks in at very high revs.

Terrano gets one of the most sorted suspension setups for the Indian roads within the Rs.15-20 lakhs range. Once the speed builds up, the Terrano simply glides over anything it encounters on the roads. At lower speeds though, the setup seems a bit rigid, but as it crosses 40kmph mark, the suspensions irons out anything that comes its way. The 16 inch-errs further add to an accomplished drive. Occupying yourself inside the compact SUV, you will certainly feel comfortable seating and the chrome and silver colour layout gives the interior a plush and luxurious look. The interior cabin got an attractive dashboard and instrument panel. This SUV brings a high-quality internal environment to the buyer. 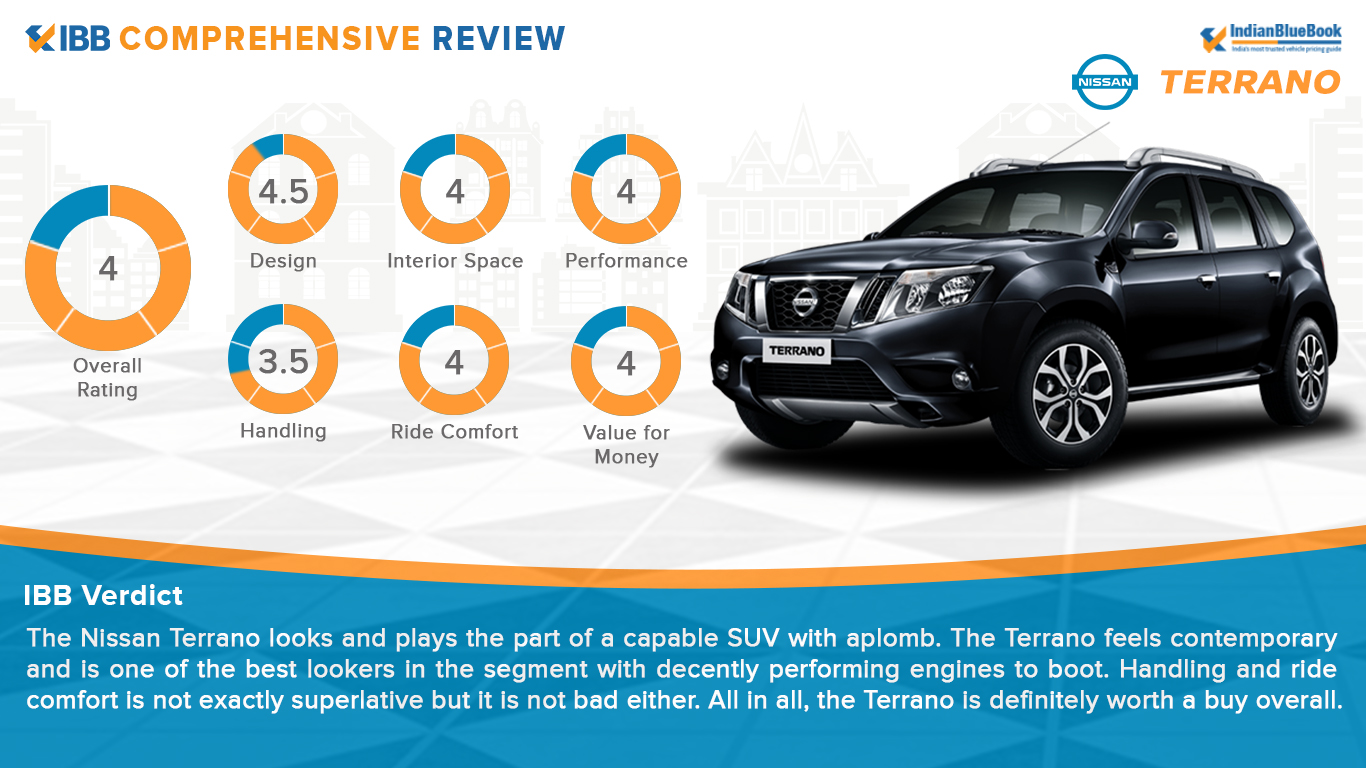