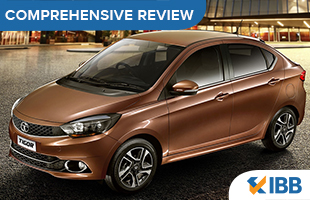 The tax rebate for cars under four meters made a lot of car manufacturers in India to shoehorn a boot on to the existing hatchback models and led to the birth of a unique segment in India, the Compact Sedan segment. Tata started this trend with their Indigo CS and other manufacturers followed suit. Tata is the only manufacturer to have more than one model in the Compact Sedan segment (another one is the Bolt derived Tata Zest). Tata has introduced yet another model in the segment taking the tally to three cars!

Tata Tigor is the Compact Sedan derivative of their most popular car at the moment, the Tiago. But, Tata doesn’t like to call this car a humdrum Compact Sedan, instead, they call it the ‘Styleback’. Let’s explore… 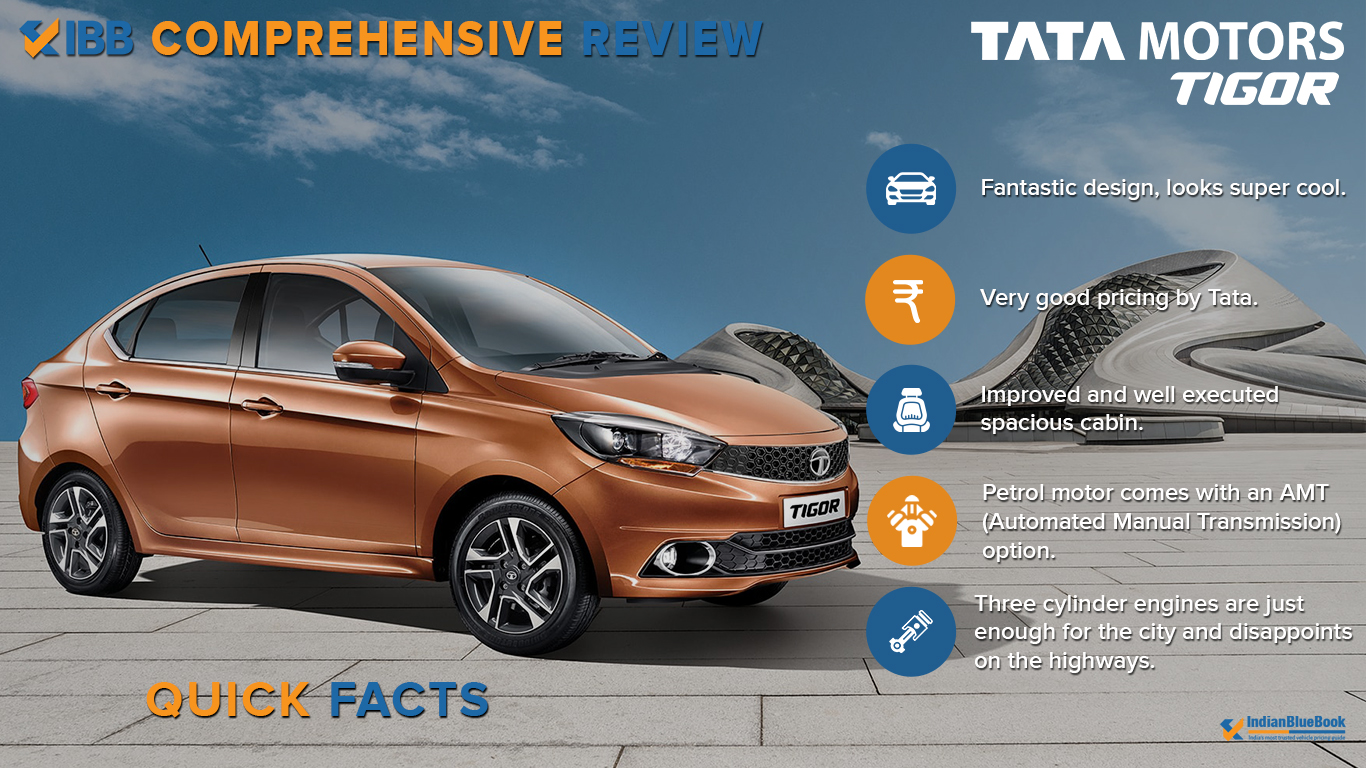 Upfront the car instantly reminds you of the Tiago. However, Tata has made some subtle design changes to the Tiago design here. To start with, the headlights are twin barrel with smoked effect. The indicators are also placed differently at the bottom of the headlight cluster.

There is a chrome line above the light cluster and no DRLs on the Tigor. The smiling hexagonal grille finished in glossy black and humanity lines (chrome strip under the grille that connects the headlights) give Tigor a pleasant face. The ORVM have indicators integrated.

The side profile is totally reworked unlike the ‘boot copy paste’ job seen usually on other Compact Sedans. Tata has thoroughly reworked the design past the B-pillar on the Tigor. Tigor is wider and has more wheelbase (50 mm) than the Tiago. Most unique style element is the way in which the roof blends into the tail, which we have never seen in any car in India. The coupe-like roof and its integration to the rear make this car look a class different from the usual Compact Sedans. The rear doors are also large and also houses a quarter glass.  The petrol top end XZ and XZ (O) gets pretty cool 15-inch diamond cut alloy wheels. However, diesel variants get comparatively boring 14-inch alloys which are already seen on the Tiago.

At the rear, you get a segment first split tail lamp unit. Also, the attractive looking tail lamps get gorgeous LED treatment giving the car an upmarket feel. There is a thick chrome strip that runs across the rear and it gets inside both rear lamps as well (it looks classy and neat). There is only one reverse light located at the bottom left corner of the bumper.

We really like the use of pneumatic struts used to open the boot over the conventional gooseneck hinges which eat away into the boot space. Also, this car offers a class-leading 419-liters of boot space. The wide LED high mount safety LED light runs across the length of the rear windshield looks really attractive.

Tata shares the same dashboard design of the Tiago. The quality of Tata car’s interiors have improved leaps and bound in the recent past. The black and grey theme of the Tiago continues here as well. The quality of the materials and execution is pretty neat, and we absolutely don’t have any complaint on this front. Tata has made some changes, compared to the Tiago interiors.

The major change is the inclusion of the 5-inch touch screen unit. The chunky steering wheel (same unit on the Tiago and Zest) is just right in size and pretty comfortable to hold.

Space wise, like other Tata cars you have nothing much to complain. Interestingly, Tata has lowered the seats a little bit to improve headroom which translates to a sense of spaciousness. The front seats are big and can accommodate all sorts of human frames in comfort. The rear seats are pretty broad and can seat three adults abreast at reasonable comfort.

There is sufficient legroom and shoulder room at the front as well as the rear. The center armrest can be folded down and is pretty comfortable when the middle occupant is not there. The seats are also inclined to give a comfortable posture at the rear. The fabric used for the seats have a nice and comfy pattern and is built to last.

The Tigor shares the same engines that power the hatchback sibling, the Tiago:

The Revotorq three-cylinder diesel unit dispenses a peak power if 70 hp @ 4000 rpm and a maximum torque of 140 Nm @ 1800-3000 rpm. The power figures are low compared to other cars in the segment. And moreover, this is a three-cylinder unit. The car does pretty well in city traffic conditions. Though there is a slight surge of power in the 1800-2000 rpm, it can never be compared to the kick you get in a diesel Dzire. On the highways, you need to work a lot on the gearbox to maintain the engine on boil. Highway high speed overtaking requires some advance planning. The gearbox is pretty slick and the light clutch complements it well.

The petrol variant is powered by the larger 1.2-liter Revotron engine. This is also a three-cylinder unit, but, Tata has added a balancer shaft to negate the jerkiness associated with a three-cylinder motor here. The engine feels smoother compared to the Tiago. The petrol engine has just enough power to triumph over city traffic. The 85 hp motor still don’t have anything to get excited about. The engine needs to be revved hard to make some progress, and it is not a smooth engine as well at higher realms of rpm.

Both the engines are equipped with Multi-Drive. There are two driving modes to choose from:

The City is the regular driving mode and Eco is the fuel saving mode. The Eco mode dulls the performance up to 30% but considerably improves fuel efficiency. We suggest using the Eco mode while cruising at moderate speeds on the highways only or not use it at all!

The Tigor has matured handling and ride characteristics. The steering is light in ‘stop and turn’ as well as city driving conditions, and nicely weighs up as the speed builds up. The car also handles pretty well around the corners with a slight but controlled body roll. The tires also offer pretty good grip and instill confidence.

Dual airbags are available only on top XZ, XZA, and XZ (O) variants. Speed-dependent auto door locks are a standard feature on all trims except the base XE variant.

ABD with EBD and Corner Stability Control is a standard feature in all trims except the XE and XM variants. Tata should have offered dual airbags and ABS standard across the range. 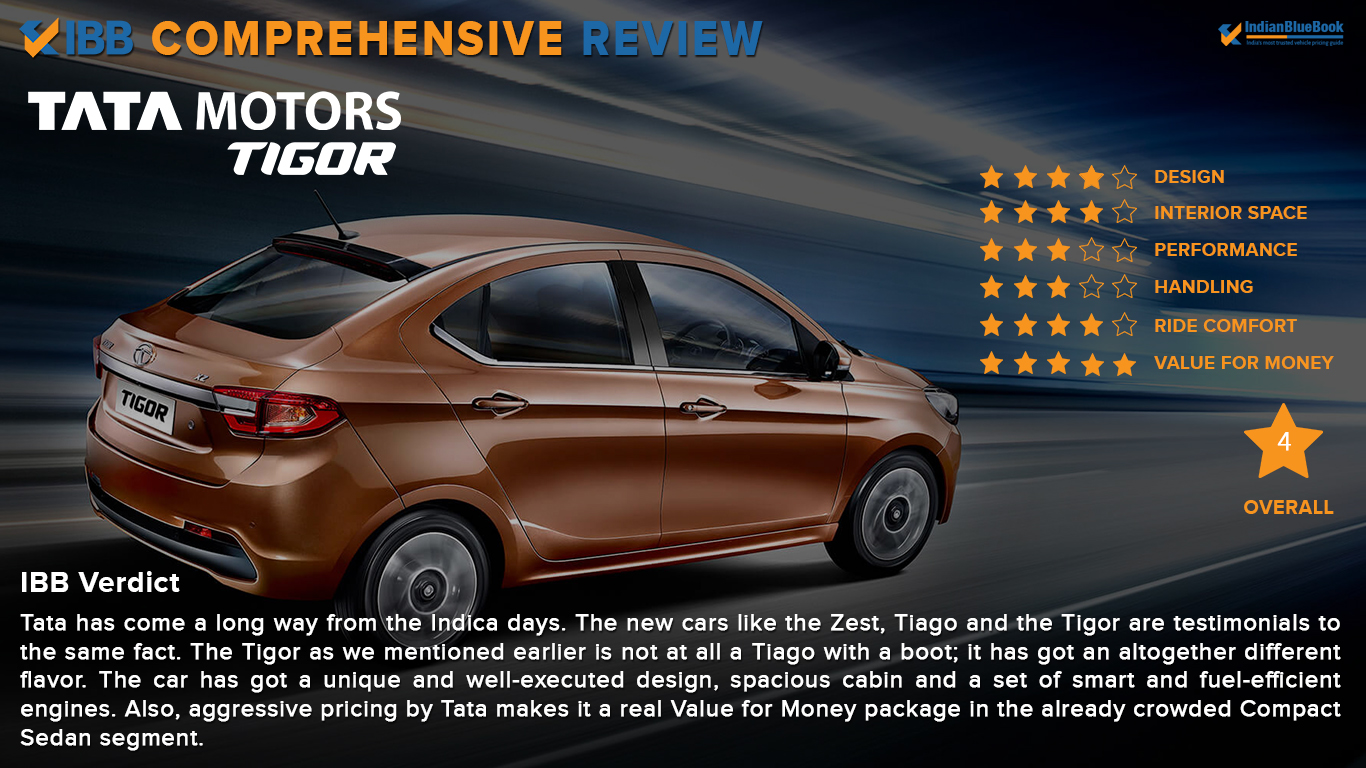