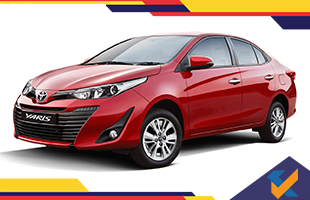 It has been a great year for Toyota as it witnesses 20% sales growth in the domestic market by selling 13,113 units in May 2018, which is a huge leap compared to 10,194 units in the same month last year. The Toyota had a total sell of 13940 units that also includes the 827 units of the Etios that had been exported last month. This double digit sales growth has actually given a huge boost to the company and the deputy managing director of the company has expressed their greater future plans.

Yaris has been one of the most important contributors to the overall positive sales growth as compared to the digit last year. This brand has ruled over the units that got sold in this month. The response has been immense. The company very recently has launched the Yaris sedan and that has received great response. By the end of May, more than 4000 units of the same were dispatched to the dealership in order to cater to the customer orders. The prices of the Yaris Sedan has been ranging from Rs. 8.75 lakhs to Rs. 14.07 lakhs which make it even more affordable and accessible than many of the recent launches; hence, the demand has also soared high.

Toyota has already started the production of the compact sedan in order to successfully meet the high demand of this car by the customers. The sales trend in the domestic market has gone notches higher helping the profit graph to witness upward trend. The company is trying hard to reduce the waiting period for the customers; therefore, they have started the production beforehand. The automatic variant of the C-segment sedan has received overwhelming response in the Indian market as the carmaker claims that it has received over 65% of all the bookings for the automatic version.