Toyota Yaris - What To Expect 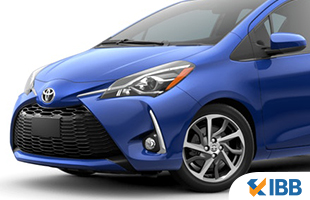 Toyota Yaris - What To Expect

Toyota showed the new Yaris sedan at the 2018 Auto Expo. The Yaris is a globally retailed offering and is sold majorly in several developing and ASEAN markets. The Yaris will compete with midsized sedans like the Honda City, Hyundai Verna, Volkswagen Vento and Skoda Rapid in the segment. The Yaris will be manufactured in India and most of the components will be assembled in Bangalore while the engine will also be assembled with local components. The mini Corolla-esque design should be attractive for many buyers. The Yaris comes with the high-mounted headlight element which looks really enticing along with the black air dam and arched roof. The rear portion is also well proportioned.

The Yaris will initially come with a 1.5 litre petrol 108 hp engine that is paired to a 6-speed manual transmission unit. There is a 7-speed CVT option available as well. The engine comes with dual variable valve timing for enhanced performance and a diesel engine option may be introduced in the future. However, a hybrid powertrain may be introduced before the diesel variant. The Yaris is shorter than the Honda City albeit only marginally and has a shorter wheelbase as well.

However, the Yaris is a wider vehicle and this will ensure enhanced cabin space. The Yaris makes use of the B platform from Toyota along with a non-independent torsion beam rear and McPherson strut front suspension system. The ride height has been slightly adjusted for Indian roads while there are stiffer dampers and taller springs. There are 15-inch smaller wheels for the India-spec model and the tyre width has been kept lower too. The Yaris has 185 section tyres in order to attain higher fuel economy figures. Road noise has been lowered with special sound deadening materials. There are extra bits for the door pads, floor and firewall.

The Yaris will get 7 airbags which is a best in class feature including a knee bag and there are disc brakes for all four wheels along with traction control, tyre pressure monitoring system and ESP. The cabin resembles a Corolla and the steering wheel design also seems quite familiar. There is the touch screen system that is flanked by chrome detailing. The two-tone dashboard looks great and there are several bins and cupholders inside. There are also touch-sensitive air conditioning controls and the color display in the instrument panel is also attractive. There is a big cooled glovebox as well.

There is no direct USB port although there is one for the audio setup. There are three 12V power outlets, namely one in the front and two in the rear. There are comfortable and nice front seats with ample side bolstering and the adjustment range is also good. Rear seat comfort is also pretty nice while there is decent legroom available. However, there is a little squeeze in terms of headroom while there is a roof mounted air conditioning system. There are digi controls at the rear and the blower speed is also pretty good. There is a decently sized boot and the rear splits can be split and folded for ensuring more cargo space.

The Yaris is expected to be priced anywhere between Rs. 8.4-13.5 lakhs (ex-showroom, Delhi) which will undercut the Honda City by a slim margin. The Yaris will also get other best in segment features like front parking sensors and a powered driver’s seat. There is electronic stability control along with a sunblind at the back, a tyre pressure monitoring system and 7 airbags.