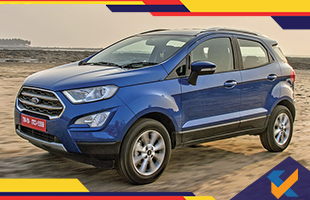 The American multinational car company, Ford brought forward its EcoSport model in 2004 and since then there have been many generations of the car that have been launched all over the world including India. The newest launch has been in 2017 and another facelift variant was launched in 2018. This compact SUV has many inclusions like a new and more robust diesel powertrain apart from the petrol variant. 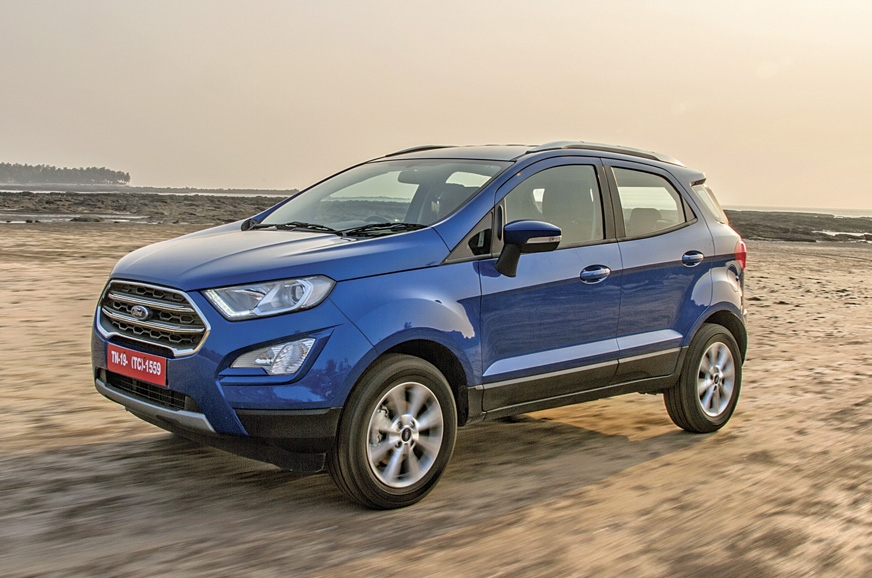 The Ford Ecosport is based on the Kinetic Design theme. There are many exterior features that grab the eye including the sleek front grille with the hexagonal lower grille and chrome outlines, stylish revamped head lights with LED daytime running lights, rain sensing wipers, reworked skid plates and the new 17 inch alloy wheels. Fog lamps with chrome surrounds are placed adjacent to the front grille. The signature LED lights in front are assertive and bold leaving a style statement. Rear comes with a mounted spare wheel, chrome swing gate door handle, wrap around tail lamps, integrated spoiler and black cladding. Side profile is equally stylish as its front fascia.  Outside door handles and outside rear view mirrors both are coloured in body paint to match the look. Turn indicators are integrated on the power adjusting and power folding ORVMs.

The all-new interiors of the Ecosport makes it look trendy. The interior is black and grey which looks premium along with blue backlight buttons on the centre console for ambient lighting. The car comes with ample space in front and rear. Comfort is also a top priority for the car maker and have provided with decent thigh support, reclining rear seats, foot rest, height adjustable driver seats for lumbar support and arm rests for drivers. Use of leather is visible on steering wheel, hand brake and MT gear shifter knob. Seats are covered with fabric upholstery save for the range topping variant that gets leather covers. Chrome embellishment is also exclusive to the top-spec variant giving a miss to the rest of the trims. The Ford Ecosport has reverse parking sensors, FM/AM Radio, Aux-In and USB port and Bluetooth, cooled glove box, three-spoke Ford steering wheel with controls for music system and telephone, one-touch up & down function on driver side window, push start button, climate control air-conditioner and front and rear disc brakes. When it comes to safety there are the 6 airbags, ABS with EBD, traction control and even ESP on the petrol automatic variant. It also comes with ISOFIX mounts for child seats in the back.

The EcoSport comes with three engine options – the 1.0-litre EcoBoost, the 1.5-litre petrol and the 1.5-litre turbocharged diesel. The 1.5-litre diesel develops 99bhp of power at 3750 RPM and 205Nm of torque at 1750 to 3250 RPM. The four cylinder turbocharged diesel comes mated to a five-speed manual gearbox and drives the front wheels. The 110bhp 1.5-litre Ti-VCT four cylinder petrol engine gets two gearbox options – the five-speed manual and the six-speed dual clutch automatic gearbox. The 1.5 litre petrol engine belts out 112 PS at 6300 RPM along with 140 Nm of torque at 4400 RPM. The 1.0-litre EcoBoost is the most powerful of the three at 124bhp of power at 6000 RPM and 170Nm of torque from 1400 to 4500 RPM and comes with a five-speed manual gearbox. The updated car prices range between Rs 8.4 lakh to Rs 11 lakh as compared to the Rs 7.8 lakh to the Rs 10.5 lakh for the previous variants.