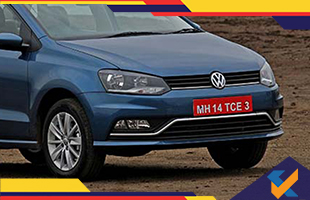 The old 1.2 litre motor of the Volkswagen Polo was replaced by a new 1.0 litre petrol engine last month. Volkswagen India also said that all its models which use the former will gradually shift to the new 1.0 litre unit. In its attempt to implement the same, Volkawagen will now offer the new petrol engine in the Ameo. The price of this sub-four metre compact sedan starts at Rs. 5.50 lakh and goes up to Rs. 7.35 lakh (ex-showroom Delhi).

The new 1.0 litre petrol engine is a 3-cylinde unit which churns out 75 bhp of max power and 95 Nm of peak torque, which is 1 bhp and 15Nm less than the outgoing 1.2 litre petrol engine. No automatic for this engine variant is being offered as of nw. the new engine on the Ameo is now the least powerful petrol engine in its segment, and continues to be equipped with a 5-speed manual transmission unit. As far as the diesel variants are concerned, they will continue with the 1.5 litre oil burner.

According to Volkswagen, the rest of the features as well as the number of variants remain unchanged. The Ameo continues to get dual airbags and ABS as standard across all variants. The higher trims are accompanied by a touchscreen multimedia system along with cruise control, rain-sensing wipers, anti-pinch power windows, cornering lamps, etc. The Ameo will have to put up a strong battle, being pitted against formidable rivals such as the Maruti Suzuki Dzire, Hyundai Accent, Tata Tigor, and the soon-to-be launched new-generation Honda Amaze.