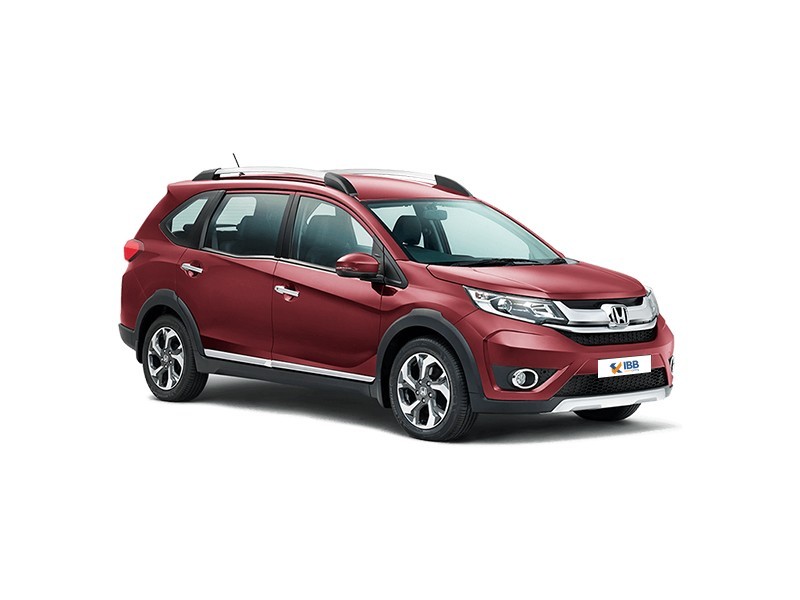 The Honda BR-V was billed as Honda’s new compact SUV for the Indian market upon its launch and uses the same platform as the Mobilio MUV and other cars like the Amaze and Brio. The BR-V nomenclature translates into Bold Runabout Vehicle and Honda has positioned the car strategically for an urban audience. The BR-V is not for those looking for a rugged off roading SUV. The BR-V competes with the likes of the Renault Duster, Nissan Terrano, Maruti Suzuki S-Cross, Mahindra TUV300, Mahindra NuvoSport and Hyundai Creta in the Indian market. The BR-V is the longest of all the compact SUVs, measuring around 4, 456 mm and it is differentiated by way of design from the Mobilio/Brio/Amaze which is a positive aspect. The BR-V has a bespoke front fascia complete with the chrome laced two part grille, angular shaped headlamps and the bonnet. The side profile, however, could well make it appear like a Mobilio.

There is no attractive SUV stance in case of the BR-V and the roof is not that high and the body looks pretty narrow in spite of it being the lengthiest in the segment. The rear feels more like an MPV than an SUV and this is a seven seater as compared to the bigger rivals like the Duster and Creta which are 5 seater vehicles. There are bumper scuff plates, roof rails and wheel arch cladding. The 16 inch wheels look small for the large body of the car and the rear styling looks nice with the solid chrome adornment for the number plate mount and the reflector. The rear windscreen ensures good visibility and the tailgate extends quite low downwards which makes unloading and loading luggage easier. There is decent luggage room with all three rows kept up. The last row can also be folded to free up 691 litres of boot space.

The BR-V is easy to get in and out of. The BR-V has the same dashboard like the Honda Amaze which is again similar to the Honda Jazz. The cabin is nice and the all black theme is a nice touch. The plastic quality is decent but nothing excellent. There is no touch screen infotainment unit which should make it lag behind rivals. The infotainment unit has Bluetooth and audio streaming. There are steering mounted audio buttons, automatic climate control, push button start, electrically foldable outside rear-view mirrors and rear air conditioning features for top end models. Reverse parking sensors are also absent. Honda has made dual airbags standard across the range along with ABS which is standard as well.

Visibility is decent with comfortable front seats and the middle row seats are nice as well. Legroom in the middle row is good but the last row’s knee up seating position may make you a tad uncomfortable. The BR-V has the 1.5 litre i-DTEC engine from Honda which makes 100 hp and 200 Nm which is the same as the one on the Honda City, Jazz and Mobilio but refinement is a little more. The engine is quieter for the diesel BR-V trim but it is still noisier as compared to its other rivals.

The diesel engine performs pretty well but does not quite excite the driver. There is a six speed gearbox that is linked to a light clutch. There is good fuel economy of 21.9 kilometres per litre and this may draw customers. The 1.5 litre i-VTEC petrol engine comes with both manual and automatic transmission options. The manual version is a 6 speed unit and the petrol version offers fuel efficiency of 15.4 kilometres per litre for the manual version while the automatic version manages to draw 16 kilometres per litre. The CVT BR-V with paddle shifters feels nice to drive and pretty responsive. However, pushing the engine immediately brings that dampening feel that CVT gearboxes are sometimes known for and there is a fair amount of noise as well. The BR-V feels stable at high speeds and ride comfort is good enough with 210 mm of ground clearance which should be decent on Indian roads. The Honda BR-V is overall nice to own and comes with decent features as well and the price point also feels okay in general.

Honda will be joining the most happening segment, the SUV/ Compact SUV segment with their new offeri... Read more

Honda is all set to venture into the mini-SUV segment against the likes of Ford Ecosport, Renault Du... Read more

The second-gen Honda Brio is expected to make a world premiere at the upcoming GIIAS 2018 (Gaikindo... Read more

Latest nine-speed automatic gearbox is introduced on the Civic diesel model by Honda. It was for the... Read more

Recall of New Honda Am...

An issue has been recalled by Honda for the faults in the electric steering wheel in their new compa... Read more

The entry of the new Amaze has given Honda a jolt. The carmaker sold 9,789 units of the Amaze in May... Read more

May 2018 was a stellar month for HCIL (Honda Cars India Limited) as it had total sales volumes of 15... Read more

Things you need to kno...

The 2nd gen Honda Amaze has obvious better looks in comparison to its predecessor 1st gen Amaze. The... Read more

Things you should know...

The Honda Civic has always been one of India’s favourite cars. And this year it is being reincarnate... Read more

Honda is one of the leading automobile company in India which comes up with upgraded new car model e... Read more

Competing with the Maruti Suzuki Dzire, the Honda Amaze had been launched in the Indian market as a... Read more